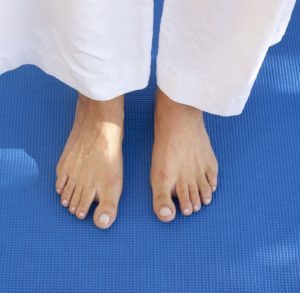 A new temperature-monitoring foot mat that can predict the development of diabetic foot ulcers could be the next big technological advancement in diabetic foot care.

The technology is still in its infancy, but it’s producing some successful results. According to the research, the temperature-monitoring foot mat was able to correctly detect 97 percent of impending nontraumatic diabetic foot ulcers in a high-risk population

“We showed that using this wireless mat and an algorithm that detects temperature rise over several days, it is possible to detect development of an ulcer 5 weeks in advance,” reported Robert Frykberg, DPM, podiatrist at Phoenix VA Healthcare System, Arizona, and lead investigator of the study.
Benefits of Temperature Monitoring

When you suffer an injury, you may notice that the injured area is a little warm to the touch. This warming sensation occurs because blood vessels dilate as more blood is brought to the site. A similar process occurs in diabetic foot ulcers, but this change in temperature happens before the ulcers fully develop on the foot. By checking for heat spikes or temperature abnormalities, researchers have been able to predict the onset of ulcers before they develop on a person’s foot, which aids in treatment and reduces severity and likelihood of problems.

Medical experts have been aware of this temperaure change in a person’s foot, and current US guidelines for diabetic foot care suggests daily thermometry of the foot, but there hasn’t really been a good way to track the temperature of an area of a foot or changes in temperature, so few diabetics and doctors rely on the insight when it comes to foot care. That may soon change with the development of the temperature-mapping foot mat.

The technology is relatively simple yet ingenious at the same time. The wireless floor mat requires the patient to stand still for 20 seconds each day. The mat reads the temperature of the person’s feet in a number of different areas to obtain plantar-temperature mapping data which is then cataloged in a monitoring center. A program studies the map, and by comparing it to previous readings, it can predict the onset of diabetic foot ulcers with high certainty.

“Essentially, the mat detects areas of increased inflammation that often precede ulceration,” explained Dr Frykberg. “It has been shown, in this and other studies, that when this device is used with early intervention, it can very likely reduce the development of recurrent ulcers.”
One Drawback

However, there is one drawback with the technology in its current form. Although it accurately predicted the onset of diabetic foot ulcers in 97 percent of instances where an ulcer eventually formed, it also had a 57 percent false-positive rate. So while the vast majority of ulcers are being identified by the machine, it’s also currently flagging a number of areas that don’t turn out to be ulcers. It’s better to be safe than sorry, but researchers will need to reduce that high false positive rate if the device is going to gain widespread attention.

“The standard temperature difference used was 2.22°C, but we can probably become more specific with new algorithms to eliminate many of these false positives.”
The technology is still in its infancy, and it has been designed to help predict foot ulcers in high-risk populations instead of the general population, but it’s a step forward in the right direction. Diabetic foot ulcer management can cost tens of thousands of dollars if infections set in. With this technology, we may be able to treat these ulcers much earlier and greatly reduce problems associated with their formation.