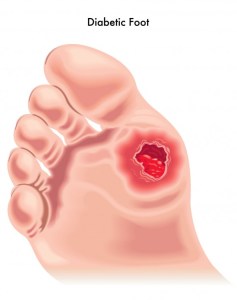 Keeping a positive attitude may help clinical outcomes of diabetic foot ulcers, according to new research out of England.

For their study, health psychologists at England’s University of Nottingham interviewed a total of 169 patients over the course of five years to determine if attitudes and beliefs about symptoms could impact clinical outcomes.

“We wanted to test the hypothesis that life expectancy in people with diabetic foot ulcers is shorter in patients with negative beliefs regarding their symptoms and attitudes to caring for their feet,” wrote lead researcher Kavita Vedhara, Ph.D.

Each patient interviewed for the study received the same treatment and foot care advice for their diabetic foot ulcer. Researchers followed up with patients in 2011, between four and nine years since they first joined the study. Of the 160 patients whose information was accessible, 104 were alive and 56 has passed away. Mental health scores showed that the majority of patients showed low levels of depression, but many patients who passed away reported a wide range of concerns, including:

“These patients who died also believed that their ulcers would have more serious consequences for them, believed they would last a long time, found them distressing and believed they had little control over them,” Vedhara wrote.

In the end, researchers concluded that patients’ negative assumptions about their diabetic foot ulcers may impact their survival likelihood. Researchers said their study proved causation, not correlation, but wishful thinking isn’t going to solve all your problems. If you have diabetes or a diabetic foot condition, make it a priority to keep your feet as clean as possible to prevent infection. Keep your feet dry and check them regularly for any signs of a problem. Caring for your diabetic feet is mentally and physically demanding, but this two-pronged approach is the best way to control symptoms associated with diabetic feet.