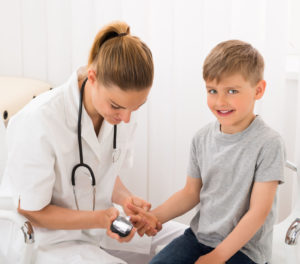 New research from across the pond suggests that children who don’t get as much sleep as others are at an increased risk for developing type 2 diabetes.

Previous studies have found an association between too much sleep and too little sleep to type 2 diabetes risk in adults, but this is the first study to examine the correlation in children. For their study, researchers in the United Kingdom examined the sleep habits of more than 4,500 children of different ethnicities. Children self-reported what time they went to bed and what time they got out of bed in the morning on school nights. Researchers also collected blood samples to look for a number of different markers, include insulin, glucose, leptin, and lipids, and other health measurements like BMI and blood pressure were also tracked.

Here’s a look at what researchers uncovered:

There was a strong link between shorter sleep duration and increased risk for diabetes, as well as increased body fatness.

Increasing the mean weekday sleep duration by half an hour could be associated with 0.1 lower body mass index and a 0.5% reduction in insulin resistance.

For every extra hour of sleep, body fatness decreased by between 1-3%, while insulin levels decreased nearly 3%.

“The current study is novel in showing inverse associations between reported sleep duration and type 2 diabetes risk factors in early life, which are independent of adiposity and observed in different ethnicities,” wrote Alicja Rudnicka, PhD, of St George’s, University of London, United Kingdom, and colleagues. However, she noted that the study only shows correlation and not causation, and that will be the focus of future research. “Establishing causality is a priority because increasing sleep duration could offer a simple, cost-effective approach to reducing adiposity and type 2 diabetes risk from early life.”
Preventing Diabetes in Children

So while lack of sleep certainly appears to have a modest effect on diabetes risk, there are other aspects of a child’s life that call for more focus if your goal is to prevent diabetes risk. Those two areas are diet and exercise.

Children in this study were between 9-10 years old, and at this age, while they certainly have the capability to go to the refrigerator and grab an ice cream bar, the majority of their meals are still planned and cooked by parents, which means adults can influence their child’s food choices. Make sure you are serving them a wide range of healthy options so they get the full spectrum of vitamins and minerals. Experiment with different healthy dishes to find what your child does and doesn’t like. You hold the power of your child’s food choices, so if they are eating unhealthily, the responsibility falls on the parent to correct it.

As for exercise, try to get outside and play with your kids. Don’t just let them sit in front of a television or gaming console all day. Get them outside and involved in activities. Whether that means signing them up for swim lessons, soccer or girl scouts, if they are active and moving they are cutting down on their diabetes risk. For more information on what activities may be available to your child, reach out to Dr. Silverman or your local parks and recreation association.