Diagnostic accuracy of resting systolic toe pressure for diagnosis of peripheral arterial disease in people with and without diabetes: a cross-sectional retrospective case-control study - Journal of Foot and Ankle Research 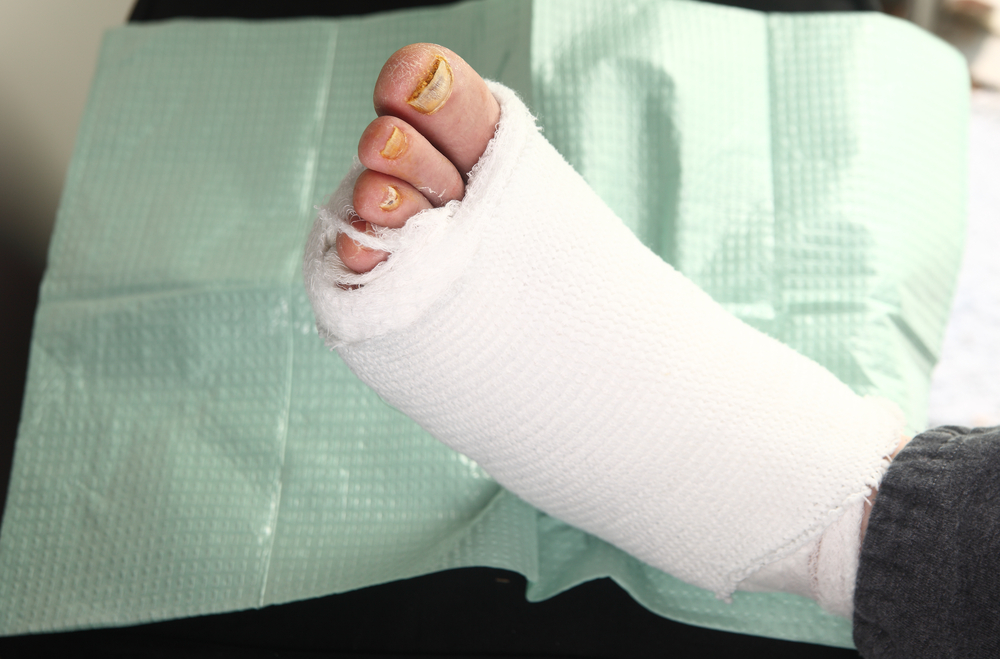 The early diagnosis and treatment of peripheral arterial disease (PAD) in the lower limb requires effective clinical assessment of peripheral vascular status [1]. The presence of a number of factors including diabetes, renal disease and older age are known to affect the accuracy of currently recommended large artery assessment methods such as the ankle-brachial index (ABI) [2,3,4]. In those with diabetes, there is substantial evidence that the ABI has reduced diagnostic accuracy for identification of lower limb vascular disease, particularly in early stages of the disease [5]. This limited accuracy is attributed to the increased likelihood of co-existent vascular complications including medial arterial wall calcification (MAC) and a more distal anatomical distribution of disease [2, 6,7,8].

The resting systolic toe pressure (TP) is a measure of small arterial function in the periphery. TP is a reliable [9, 10], non-invasive, time and cost-efficient tool. It is currently used as an adjunct to the ABI when screening for PAD of the lower limb in those with diabetes, particularly in the presence of suspected lower limb MAC (ABI result exceeding 1.3 or 1.4) [5, 11]. It is also used as part of an objective assessment of lower limb vascular function when used in calculation of the toe brachial index (TBI)- a ratio of TP to brachial pressure [12]. Low TP has also been demonstrated to be predictive of foot ulcer healing outcomes, with a TP of 50%): focal increase in velocities 250 cm/s-350 cm/s and greater than threefold increase in velocities, 75–99% (>75%) stenosis- focal increase in velocities >350 cm/s, fourfold increase in velocities, occlusion- vessel well visualised, no colour or Doppler flow seen [19, 20]. The reliability CDU and pressure testing performed by this vascular laboratory has previously been shown to be acceptable [21].

Sensitivity of TP for detecting PAD was examined by anatomical location of disease and disease severity. For anatomical location of disease, participant data were grouped into those with proximal disease only, those with distal disease only and those with both proximal and distal disease. Proximal disease was defined as disease from the common iliac artery to the distal superficial femoral artery, and distal disease was disease distal to, and including, the proximal popliteal artery. Sensitivity was also determined for severity of disease, with participant data grouped by disease severity of the worst affected vessel and classified as mild (>50–75% stenosis), moderate (>75–99% stenosis) and occlusive disease (occlusion).

To compare TP between the participant groups with diabetes (diabetes group) and without diabetes (control group), an independent samples t-test was performed. Pearson’s chi-square was performed to compare between group differences for gender, history of smoking and rates of PAD (present or absent). Statistical significance was set at p < 0.05.

For the purposes of reporting and statistical analyses, presence of PAD was defined as at least one arterial stenosis of >50% of the lumen diameter, as determined by CDU, being present in the limb tested [19, 20, 22]. Receiver Operating Characteristic (ROC) analyses were performed to determine the performance of TP for the diagnosis of CDU-diagnosed PAD for people with and without diabetes and areas under the curve (AUC) calculated. AUCs were interpreted in accordance with Portney and Watkins (2009) with 0.90 to 1.0 an excellent test, 0.80 to 0.90 a good test, 0.70 to 0.80 a fair test 0.60 to 0.70 a poor test and 0.50 to 0.60 a failed test [23]. All analyses were conducted using SPSS version 22 statistical software. Sensitivity, specificity, positive and negative likelihood ratios with 95% confidence intervals were all calculated in Microsoft Excel.

A total of 394 participants were included, 176 with diabetes (diabetes group) and 218 without diabetes (control group). Participant demographics are shown in Table 1, along with comparative statistics which showed no significant between group differences for gender, smoking history, rates of PAD or mean TP. Mean TP was 90 mmHg in the diabetes group, and 87 mmHg in the control group.

Whilst TP are used frequently by vascular laboratories, podiatrists and physicians, particularly in people with diabetes, the evidence for the diagnostic accuracy and appropriate diagnostic thresholds of this testing method for detecting PAD is lacking. To our knowledge, this is the first substantial study evaluating the diagnostic accuracy of TP compared to diagnostic imaging for diagnosing PAD in cohorts with suspected PAD, with and without diabetes.

This study found TP to be a fair test for detecting PAD in a mixed population (with and without diabetes) with suspected PAD (ROC AUC 0.76) [24]. This was also the case in subanalysis of people with diabetes and suspected PAD (ROC AUC 0.78) and in a control group of people without diabetes with suspected PAD (ROC AUC 0.73) [23]. Of note, presence of diabetes did not appear to affect the diagnostic accuracy of PAD. In contrast, previous studies have demonstrated the diagnostic accuracy of multiple non-invasive testing methods to be reduced in diabetes cohorts when compared to cohorts without diabetes [7, 8]. The findings of our present study suggest that TP may be less affected by vascular complications associated with diabetes which are known to reduce accuracy of large artery testing methods, such as the presence of MAC. This would, to some extent, explain the similar performance of the test in both groups. However, as we did not compare the diagnostic accuracy of TP to the results of other methods of lower limb vascular assessment in these participants, it is also possible that improvement in test performance in the diabetes group was associated with the particular participants included in this study i.e. those with suspected PAD. As over 50% of the participants in both groups had occlusions, and there was a high overall prevalence of PAD of >50% (67% diabetes group, 74% control group), there is a strong likelihood that the test performance was overestimated for both groups, limiting the generalisability of these findings. Nevertheless, our results do support the role of TP to assist with diagnosis of PAD where there is clinical suspicion of the disease in either population.

The current understanding of the clinical utility of TP is limited by a lack of evidence relating to normal values and thresholds that are indicative of PAD specifically. Previous research has focused primarily on wound healing outcomes with TP thresholds between 30 mmHg and 70 mmHg identified as predicting likelihood of wound healing [25]. As part of this investigation, we identified diagnostic thresholds of TP for PAD in people with and without diabetes by ROC analysis. Notably the thresholds for PAD (>50% stenosis) were similar in the group with diabetes (50 to 75% and the >75% categories. In this group, TP was more sensitive in mild disease (>50–75% stenosis) suggesting this test may play a particularly valuable role for early identification of disease. This, in conjunction with our findings that TP thresholds for diagnosis of PAD are higher than those previously identified for wound healing, highlights a role for clinical lower limb vascular assessment in early diagnosis of PAD. TP may significantly contribute to a clinician’s ability to identify presence of PAD early in the disease process, allowing for effective management of cardiovascular risk factors to help prevent disease progression and associated adverse cardiovascular and cerebrovascular outcomes [25]. Furthermore, while the ABI has been demonstrated to have high specificity in people with diabetes, sensitivity has been shown to be low, suggesting less capacity for early disease detection [2, 7, 8].

When analysing diagnostic accuracy of TP by anatomical location of disease, the highest sensitivity occurred when disease was located both proximally and distally in both the diabetes and control groups. This diffuse anatomical disease distribution most likely led to a cumulative, significant, pressure drop distally. TP yielded the lowest sensitivity in both groups when disease was distally anatomically located only. Distal disease is frequently reported to negatively impact accuracy of non-invasive testing methods, particularly in diabetes cohorts [2, 7], due to the co-existence of MAC and occlusive PAD in extended vessel segments [26]. This has implications for vascular testing in both diabetes and older cohorts. In these populations it is established that there is a predilection for more distally located lesions [2, 6]. Our study results demonstrate this pattern of disease does not result in the same pressure reduction at the hallux as a more diffuse proximal and distal PAD presentation. These findings highlight the need for a multifaceted approach to PAD diagnosis rather than reliance of one objective measurement. In both groups, positive likelihood ratios and negative likelihood ratios were interpreted as potentially important, indicating that PAD was likely to be present with a positive test with a small probability of PAD being present with a negative test. This suggests that TP are a fair test for use in clinical practice, however should not be used as a standalone test due to the small probability of PAD being present with a normal pressure reading.

The findings of this study should also be interpreted in light of some potential limitations not previously discussed. Due to the retrospective nature of the study, we were not able to blind the vascular sonographers to the results of the index test, prior to completion of the reference standard. The reference standard used was CDU, which is a valid imaging technique and is used extensively clinically, however, angiography remains the gold standard for diagnosis of PAD. Our population was selected from those referred for vascular testing and therefore was more diseased than the general population (67% DM, 74% control). As previously stated this is likely to have caused some degree of spectrum bias and overestimation of the diagnostic accuracy of the test [27]. In addition it also prevented the calculation of positive and negative predictive values [28]. Our population was also older, and had a large proportion of males, however, this is distribution is more typical of the population presenting to a vascular clinic for screening [29]. Both the control and diabetes groups has significant rates of MAC visualised on CDU. It is possible that MAC may have affected digital arteries in some participants and elevated the TP. As there is currently no established upper limit for a normal TP, it is not possible for the likelihood of this to be accurately estimated.

In conclusion, TPs are a useful adjunct test for non-invasive vascular assessment of lower limb. Results should be interpreted in conjunction with other vascular assessment results due to some risk of false positive and false negative results. TP values of