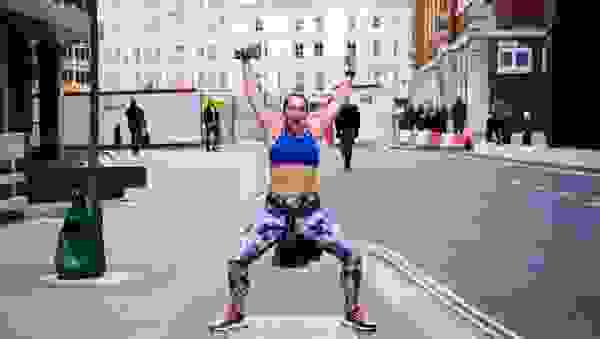 In the lead-up to last summer’s Olympics in Rio, mega-event critic and Olympic historian Jules Boykoff had a suggestion for reducing the cost of future Games while bringing a greater number of countries into the five-ring fold. In a nutshell: more runners, fewer horses. “People from around the world can run and you don’t need tons of equipment like, say, dressage,” Boykoff said at the time. “So a real positive thing the Olympics can do is to try to bring in more sports that more people can play—in other words, democratize sports.”

It’s easy to see where he’s coming from. After all, running doesn’t pose the obvious economic or geographic barriers that make more extravagant forms of recreation—like skiing, golf, or, indeed, horseback riding—the purview of the privileged few. But even as recent years have seen record numbers of road race participants in the United States, work still needs to be done to broaden the reach of the sport—particularly by challenging market and media-driven ideas about what a typical runner looks like.

These individuals are on the front lines of that fight.

As she explained in an essay for Outside, hitting a number on a scale was part of the reason why Roberts took up running in 2013. She was motivated by other factors as well­—for one thing, it helped her get up in the morning—but she’ll be the first to admit that she thought becoming a runner would result in a more svelte appearance. When her race times improved, she was initially frustrated that her athletic progress didn’t come with a dramatic change in her physique. Eventually, however, she realized that the positive effects of running had more to do with a feeling of strength than resembling the sylphlike ideal pushed by the fitness industry. She hopes that her example will lead others to the same conclusion.

“I think the second people stop trying to run to lose weight and just try and do it to take a step towards becoming the strongest version of themselves, everything kind of falls into place,” Roberts says. “Running is such a great way to feel accomplished in your strength—instead of tying the image to the accomplishment.”

Robinson is the founder of Black Roses NYC, a competitive running crew which, as he puts it, seeks to connect “group training practices and philosophies normally reserved for elites to the reality of urban life as New Yorkers exploring our city through the filter of running.” As he explained in an interview with writer/coach Mario Fraioli, Robinson prefers the term “crew” to “club,” because “club” connotes “split shorts and super intense dudes” and “people freaking out about their shit.”

Although some Black Roses members are themselves quite intense in their athletic pursuits (and, yes, some even wear split shorts), the crew prides itself on maintaining its bond to NYC street culture—training runs double as opportunities to discover new sides of their diverse, ever-changing city.

Diversity is something that Robinson would also like to see reflected in the profile of those making decisions about the future of running:

“What we need is people at the highest levels of the sport—whether it’s at our sport’s governing bodies or at the brands who continue to gain material recompense from us putting one foot in front of the other—those people need to look. Like. Us. Half of us are women—let’s have half the people in the room be women. Some people are black and brown—let’s have some black and brown people in the room. Beyond it being about complexion or skin tone, it really needs to be people who ideologically and viscerally understand real people, regular people who are running in the streets—not people who are doing it flying in and out of town for caviar dinners and taking a payoff. It’s really got to be real people.”

When Carey started the club in 2009, it was in part as a health initiative, but also because she felt black women were underrepresented in the running community and still handicapped by some of the absurd myths surrounding women’s sports. (Carey said that when she took up running, her mother had cautioned her that running is something “only white girls do,” and that it was going to make her uterus fall out.)

Lack of representation of black women also remains an issue for the running industry as a whole; Carey has attended large Running USA conferences and been the only black woman in the room. Even though Black Girls Run! has almost a quarter million members and counting—BGR! is open to women of all races—Carey says that the major running shoe companies she’s spoken to about sponsorship and partnership opportunities have all expressed fears about alienating their “core customer base.” There have also been requests from prospective sponsors to change the organization’s name. (One less-than-creative suggestion: “Girls Run!”)

“Community and sense of camaraderie is so important and unique to Black Girls Run! particularly because—and this is getting a little political—I feel like black women in this country aren’t valued,” Carey says. “Having that support system reinforces the value that we know that we have, even when the world is trying to tell us otherwise.”

In 2012 and 2013, human rights lawyer Stephanie Case spent a year working for the UN Assistance Mission in Afghanistan, a mission which seeks to support stability in the region by fighting corruption and ensuring the rights outlined in the Afghan constitution are upheld. A dedicated ultrarunner, Case wanted to keep up her training, notwithstanding the spatial limitations of residing on a UN compound. She signed up for three ultramarathons, figuring that she’d raise money to donate to a local women’s shelter. The inhabitants of the shelter had a better idea.

“I was patting myself on the back and thinking, ‘Look at me. I’m great,’” Case recalls. “Then, when I was talking to the women in the shelter, they didn’t give a damn about the money I was raising. They just said: ‘We want to do the running, too.’”

Within a year, she founded Free to Run, an organization that works to facilitate an athletic outlet for women and girls affected by conflict, with refugee populations and in conflict areas like Afghanistan. Wary of the perils of messianic do-goodism, Case emphasizes that the principal role of Free to Run isn’t to convince anyone that they should to take up sports. Rather, the organization seeks to help aspiring athletes circumvent the logistical, bureaucratic, and cultural hurdles that impede that chance to train. In Afghanistan, for instance, Free to Run might work to obtain permission from local police forces, provide transportation to areas where women can train unharassed, and provide male chaperones for the runners.

“We helped two Afghan women train for the 250K race in the Gobi Desert and they finished it. I had such [safety] concerns about their training and their racing, and one of them said to me: ‘To live as a women in Afghanistan is dangerous. All that we want is to be able to live a full life.’