This One-Minute Move Warms Up Your Whole Upper Body 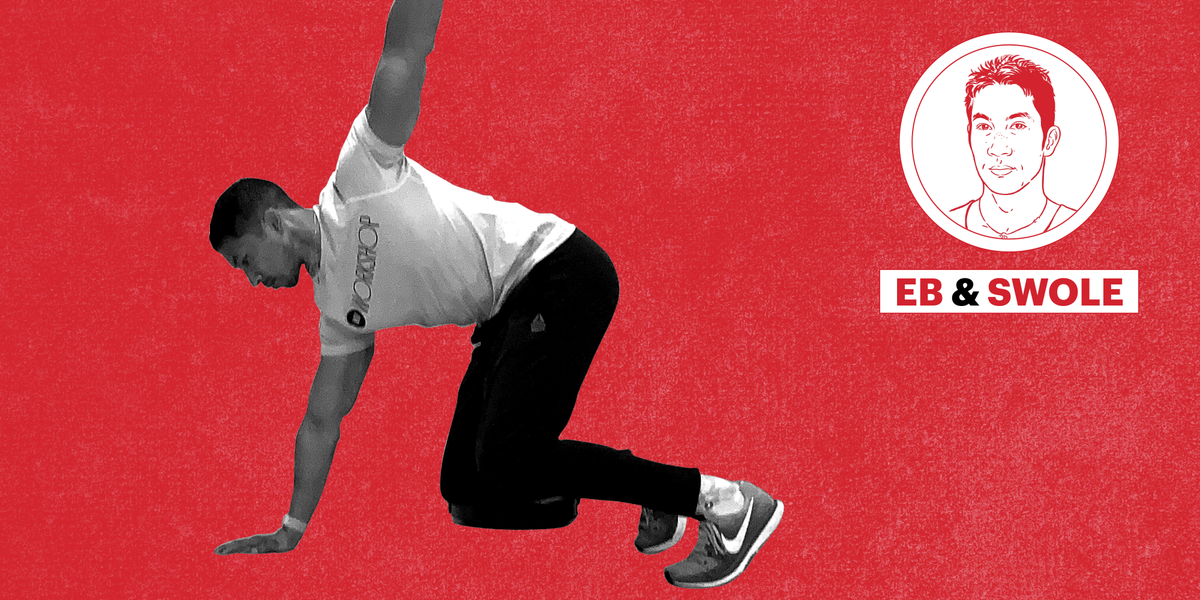 Yes, you want to bench press, squat, and deadlift. But before you get into those complex movements, you should warm up. Thing is, you don't want that warm up to take forever. Yes, a 20-minute dynamic warmup with multiple moves is sometimes ideal. But you don't always have time for that.

Enter the Bear Plank to Thoracic Rotation, a super-swift warmup move from Men's Health fitness director Ebenezer Samuel, C.S.C.S. that can have you ready to train in a matter of minutes. Heck, one set takes barely a minute, and it'll still fire up your abs, get mid-back stabilizers going, and open your tight chest, too. "We're using the bear plank idea to do multiple things here," says Samuel.

The bear plank is a "great" starting warmup point, says Samuel, because of what it does. It starts by firing up your abs, but, unlike regular planks, it also keeps you hyper-attentive to your glute positioning too. "The key is to maintain that tension," says Samuel, "as you start to create the thoracic rotation movement."

Doing so eliminates one flaw that sometimes occurs when people rotate through their upper back: Their lower back becomes a key piece of that integration. In the Bear Plank Thoracic Rotation, your lower back is occupied keeping your hips stable, teaming with abs in that equation. "That invariably means you can create less rotation through your upper and mid-back," says Samuel. "But that's a good thing here."

Why? Because it means you have to actively fire off your back muscles to create that rotation. And that's an added benefit. Do the move anywhere, says Samuel.

The bear plank to thoracic rotation is perfect as a quick upper-body warmup for any workout, reminding your body of core engagement, so you can use it before a strength workout or even before a run, too. It can also serve another purpose as well: Use it for a few minutes here and there after you've been sitting at your desk, or in the morning when you get out of bed. No matter what, it's attacking key traits that you can never do enough of, firing up your abdominals, strengthening back muscles, and creating movement through your mid-back.

For more tips and routines from Samuel, check out our full slate of Eb and Swole workouts. If you want to try an even more dedicated routine, consider Eb's New Rules of Muscleprogram.