My Gym Is Reopening. Is It Safe To Work Out There? 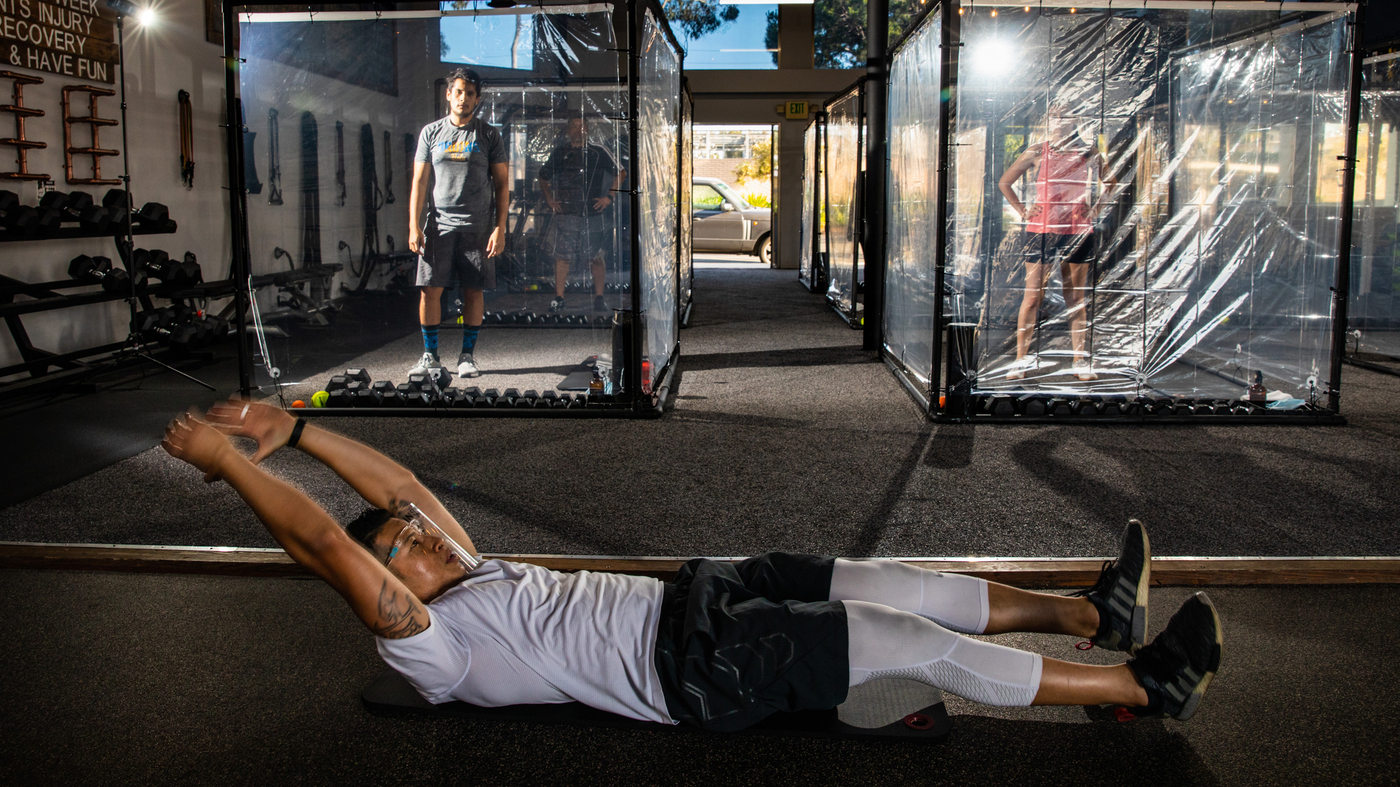 Exercise is good for physical and mental health, but with coronavirus cases surging across the country, exercising indoors with other people could increase your chance of infection. So, as gyms reopen across the country, here are some things to consider before heading for your workout.

It starts with you, saysDr. Saadia Griffith-Howard, an infectious disease specialist with Kaiser Permanente.

"You have to make your own assessment of how risky it is based on knowing your medical situation and whether you are someone who's at high risk for an infection," Griffith-Howard says.

People 65 years and older are at higher risk for getting a severe case of COVID-19, according to the Centers for Disease Control and Prevention. So are people with certain underlying health conditions, like diabetes, heart or lung disease, or those who are immunosuppressed.

So if you fall in a high risk category, Griffith-Howard says it may not be worth the risk.

"If it was someone in my family [who was high risk] I would suggest that they not go to a gym," she says.

Consider alternatives for working out

If you want to exercise indoors, it's safer to do it at home, says Doug Reed, an immunologist and aerobiologist at the University of Pittsburgh.

"That's what I'm doing now," he says. "When the weather's nice, I'm jogging outside, but when it's not, I'm doing some weights and stretches and exercise indoors."

Exercise outdoors is a great low-risk alternative, agrees Dr. Nikita Desai, a pulmonologist with the Cleveland Clinic. When you are outside it's easier to control how close you get to other people.

And the risk of transmission is lower outside than inside, saysJoshua Santarpia, a microbiologist who studies biological aerosols at the University of Nebraska Medical Center.

"Outdoors you have sunlight which has been shown to quickly inactivate the virus," he says. And outside airflow and humidity help dilute it.

If you do go: Assess your gym's safety measures

There are things gyms can do to help mitigate the risk of infection, so Griffith-Howard suggests making a checklist before you go.

"Are they taking your temperature?" she asks. "Are you seeing them regularly clean equipment? And are staff and other clients in the gym wearing a mask?"

Officialguidance for how gyms should proceed varies state by state. Gyms are not open yet in some states, or open with restrictions in others — find your state's restrictions here. Most guidelines suggest limiting capacity to keep the gym from getting crowded, routine disinfection of all equipment including machines and weights before and after use, posting signs to reinforce hygiene and other policies, and all recommend physical distancing.

In fact, that should be the number one thing on your checklist: Is there at least six feet of physical distance between everyone who is working out? Even more would be better. Another tip: Go during off hours when they'll be fewer people.

Some clubs have constructed exercise pods to ensure physical distancing. Others have gone touchless and are encouraging members to use a mobile app to check-in, says Sami Smith, Communications and Public Relations Assistant for the International Health, Racquet & Sportsclub Association, which has developed guidelinesfor clubs to use as a reference when planning their reopening.

This bears repeating — stay at least six feet away from other people while you are exercising. And, if people are breathing heavily, "it would be preferable to double that to 12 feet," says Dr. Lou Ann Bruno-Murtha, division chief of infectious diseases at Cambridge Health Alliance in Cambridge, Mass.

That's because we don't know exactly how far virus particles travel when people are breathing heavily," says Doug Reed, an immunologist and aerobiologist at the University of Pittsburgh.

"When you are exercising and exerting yourself, you're going to be breathing out and breathing in more than you normally would, he says.

"And so the potential for being infected or spreading the infection would be that much higher," says Reed.

And if you're thinking about taking a group exercise class, think again, says Griffith-Howard, because it can be very difficult to keep six feet apart when moving around quickly.

"You may be breathing harder, people may be coughing, it may be hard to keep on masks," she says. "I would have some concerns about that."

A small study from South Korea looked at coronavirus spread at 12 different sports facilities. It found that infection spread rapidly among high intensity fitness dance classes with up to 22 students. Whereas yoga and pilates classes, with just seven or eight participants and little moving around, saw no spread.

So if you really want to take a group exercise class make sure it's small and that you can maintain a distance of six to 12 feet away from others.

Steer clear of small gyms and those with little ventilation, saysDesai of the Cleveland Clinic.

"Your best bet is going to be a gym that is larger, able to have windows open or have multiple floors or levels to allow for physical distancing," she says.

That's because more space and more air flow dilute the concentration of the virus in the air and likely reduce the risk of transmission.

"If you're strenuously exercising then you're tending to draw in and exhale more air," says aerobiologist Reed.

This is especially important because there's increasing evidenceto suggest "that people who are not symptomatic are, in fact, transmitting the infection," says Reed.

So people who feel well enough to exercise may not realize they are infected, and may be on the weight machine next to you.

Our experts say it's best wear a mask as much as possible in the gym, including at the front desk, in the locker room and the bathroom — and even while doing light exercise. But of course, when you're working out hard and breathing heavily it can be difficult to keep a mask on.

"Physical exercise doesn't lend itself well to the idea of wearing a mask," says Reed, because it can make it harder to breathe.

And while many gyms recommend masks, most don't require them.

"If you're doing aerobic type exercises on an aerobic type machine, you probably are not wearing a mask," says Bruno-Murtha of the Cambridge Health Alliance in Cambridge.

And even if people don a mask when they enter the gym, Bruno-Murtha still highly recommends maintaining at least a minimum 6-foot physical distance, "because I suspect at some points people may inadvertently remove their mask," she says which can be risky for others.

"Physical exercise is important for your physical and mental health but you still have to be smart," says Bruno-Murtha. "Wearing a mask is part of being smart, along with physical distancing, disinfecting equipment and vigilant hand washing."

And, finally consider your geographic location. Exercising indoors in hot spots where cases are surging is more risky than in areas with low infection rates says Bruno-Murtha. So check out this color coded tracker to look up the COVID-19 risk in your county, and nearby counties.