5 Things This Runner Learned From Running ... Straight Up a Rock 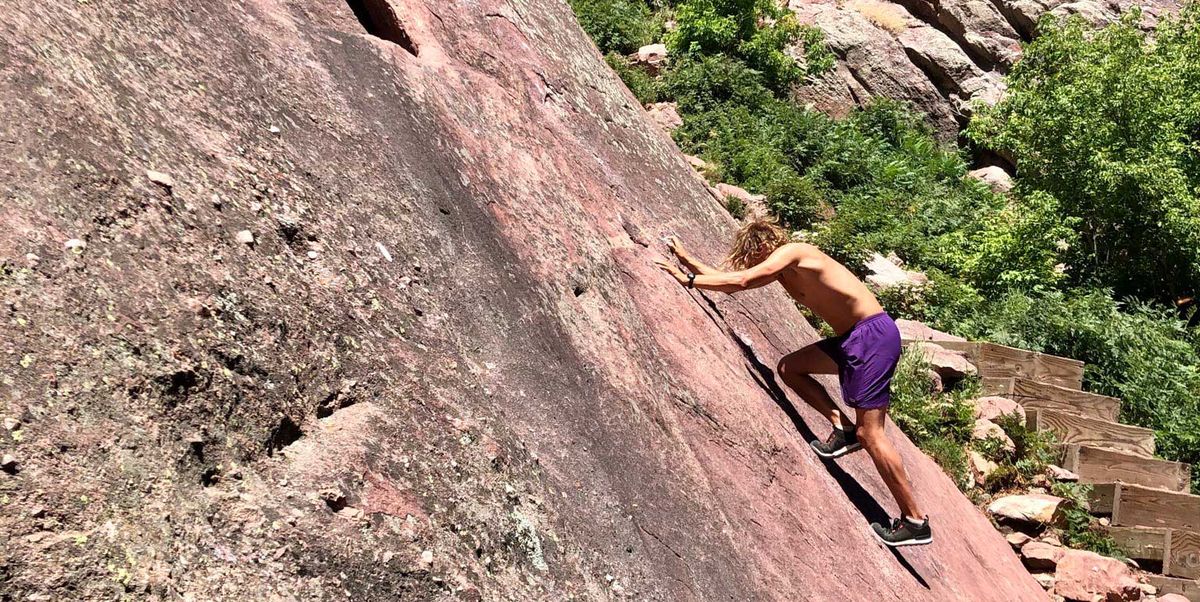 Michael Reese isn’t afraid of a little elevation change—the steeper, the better. In fact, most days he prefers to run straight up.

No, seriously. On July 3, the 26-year-old broke the long-standing record for scrambling up the First Flatiron, one of the iconic, slanted rock formations looking over Boulder, Colorado. (Though it depends on you who ask, the rock face slopes between 45 and 60 degrees, and climbs roughly 1,000 feet over a quarter-mile stretch.)

When the coronavirus pandemic struck in March, Reese was hard at work on a biology graduate degree at California Polytechnic State University (Cal Poly). He came home to Colorado—he grew up in the Boulder suburb of Louisville, Colorado, and ran cross country at the University of Colorado Boulder (CU) for a year before injuries led him to pursue climbing and triathlon—to finish out the semester online. But he quickly decided he needed a new challenge to keep himself motivated and busy, so Reese set his sights on the Flatirons.

His bottom-to-top ascent—completed without ropes—clocked in at 9 minutes, 23 seconds, two seconds faster than the record set by Stefan Griebel in 2011. Since that July run, Reese has dropped that time down to 8:59.

Reese’s record-breaking scrambles don’t come with any prize money or medals—just a bit of street cred and the satisfaction of knowing he set a tough goal, then achieved it.

So, how exactly does he run straight up a rock face? Reese starts by jogging upright, then transitions into a crouched position. He uses his legs to power his body upward (he describes the movement as “cranking on your calves and Achilles”), while his hands provide balance and grab onto cracks, crevices, and rocky outcroppings. He wears special approach shoes with grippy soles that help him plant his feet firmly on the rock with every step.

“It’s full-body,” he said. “You’re using your legs, but at the same time, you’re engaged in your core to hold yourself to the rock and you’re using your arms to pull holds and keep your upper body into the wall so you don’t fall off. It’s right in that sweet spot between running and climbing.”

Even if you’re not planning to scramble up a rock face anytime soon, here’s what you can learn from Reese to help you achieve your stretch goals.

Whether you’re a longtime runner or just starting your running journey, take your time and let your skills and experience progress naturally. There’s no reason to rush things (and, in fact, you might end up hurting yourself).

The first time Reese climbed the First Flatiron, he says he was scared out of his mind. He was still very new to climbing and wasn’t yet comfortable with the height and dizzying exposure of outdoor routes.

“I made myself promise I would never climb it again,” he said.

But, he kept climbing and running. Eventually, his initial First Flatiron fears began to dissipate—and as he ran up the rock face faster and faster, he knew the record was within his grasp.

On July 2, he took a rest day, then decided to go for the record on July 3—when the weather was unexpectedly cool. Watching his splits as he scrambled up the rock face, he said he knew the climbing was just “clicking,” and he pushed himself even harder to nab the record.

The lesson here? Keep returning to what scares and challenges you. By all means, take precautions and be smart, but give every seemingly insurmountable hurdle you encounter at least a second chance. You might feel differently about it as you grow and evolve.

“It’s good to be versatile,” he said. “If you have this drive and energy, you can pivot how that’s being used. You can do whatever is working best for you at the moment.”

Reese’s initial First Flatiron attempt without ropes in early April took him more than 17 minutes, a far cry from the sub-9-minute record he later set.

Reese trained for his record-breaking ascent by scrambling up other, easier flatirons and harder routes without ropes to get used to the exposure. He pushed himself to climb quickly up less-technical routes to improve his fitness and built endurance by linking various hiking trails and climbing routes together, combining running and climbing into one workout.

“I took training from my running background and applied it to the Flatiron, such as doing volume and quantity, then tapering down and doing faster, higher-quality stuff into a fast attempt, similar to training for cross-country or track and field,” he said.

But perhaps more importantly, he exhaustively researched different routes up the First Flatiron and practiced them obsessively.

“I would go and climb it every day, sometimes twice a day,” he said. “I just kept working this route, going faster and faster and learning every hold until I dropped my time down.”

Fitness, while important, isn’t everything. You’ll also want to spend time studying every nook and cranny of your goal, whatever it is, until you become an expert.

Friends and family members could have raised their eyebrows when Reese told them he wanted to beat the First Flatiron record. But instead, Reese’s circle of supporters stood behind him 100 percent. Sure, they asked him to mitigate the risks as much as possible, but they never tried to talk him out of his goal.

Several of his uncles ran for CU and his dad, Dan Reese, ran in college and professionally—and they understood Reese’s drive and focus while chasing his goal. Sarah Pratt, his girlfriend, often hiked up to the Flatirons with Reese (and their puppy Keeta!) while he trained, then waited at the bottom with water while he practiced his ascent. It helped to be surrounded by people who understood his ambitions and who were genuinely excited for him.

“It makes things go more smoothly,” he said. “Although people are concerned about the risk factor, they understand how much I love it and how the risk-reward is worth it for me.”

Take it from Reese: Don’t go at it alone. Find a crew who will encourage you along the way to your goal. Even better? Those who will help you keep going, even when you feel like throwing in the towel.

Growing up, Reese always loved being active outside. Running, rock climbing, and triathlon are all extensions of that passion, taking him to new places he might have otherwise overlooked.

“That’s the great thing about running—it’s like this superpower or ability,” he said. “Even if you’re not going for a record, you can now see a lot more things in nature and get places more quickly and efficiently.”

His love of nature ultimately led him to tackle the First Flatiron record, a well-known and highly respected marker of fitness and climbing ability in Boulder. Thanks to the growing popularity of Strava, it’s never been easier to compete with others, something Reese missed from his high school and college athletics days. Plus, he wanted to push his physical limits and see what he was capable of—the difficult First Flatiron was the perfect test.

“It sounds cliche, but it really is true—it’s important to follow a path you’re passionate about,” he said. “If you’re spending your time doing something you love, it’s not going to seem like a chore or work. And you never know what will come of it. More important than money and other things, the most important thing is how you spend your time.”

Training can feel like a slog if you’re not passionate about what you’re doing, so set yourself up to succeed and pursue a goal that you’ll continue to be excited about, even when things get tough.

It’s easy to feel frustrated by all the ways the coronavirus pandemic has disrupted your life. Instead, though, consider using this extra time wisely to pursue your goals, whether personal or professional.

“The pandemic has been a horrible thing, but on the other hand, you can still make the best of it and spend your time outside, away from crowds, working on bettering yourself in some way,” Reese said. “It doesn’t have to be anything crazy, but it’s important to try to better yourself in some way mentally or physically.”