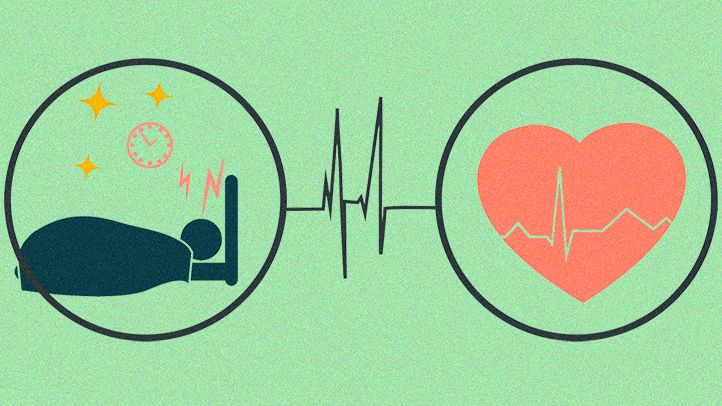 You go to bed late one night, early the next, and keep crazy hours on weekends. According to new research from Harvard Medical School, this erratic sleep schedule may be increasing your risk of cardiovascular disease (CVD).

A new five-year study found that, in older adults at least, irregular sleep patterns lead to higher rates of heart attacks and strokes than a more regular nightly schedule does. This means that sleep schedules join high blood pressure, high cholesterol, obesity, and diabetes as a serious risk factor for heart disease.

This study is important because it identifies a previously hidden risk, says Tomas Ayala, MD, a board-certified cardiologist at the heart center at Mercy Medical Center in Baltimore, who was not involved in the study.

“Unlike age and family history, sleep is something we have the potential to modify. Anytime we can identify a modifiable risk factor for CVD, we gain another weapon in our battle against the leading killer of people in the United States,” he says.

The study examined nearly two thousand participants ages 45 to 84 years old in the Multi-Ethnic Study of Atherosclerosis (MESA), an ongoing study sponsored by the National Heart, Lung, and Blood Institute (NHLBI), part of the National Institutes of Health (NIH). The study tracks thousands of Americans of many ethnicities from six communities to better understand cardiovascular disease.

Participants who did not have CVD underwent a one-night, at-home comprehensive sleep test (known as a polysomnography) and took a questionnaire-based sleep assessment. Then for seven consecutive days they wore a device on their wrist that monitored their sleeping and waking activity (called an actigraph).

Researchers followed the people for the next five years. The ones with the most irregular sleep duration or timing (meaning they changed how long they slept or what times they went to bed and woke up) ended up with more than twice the risk for a CVD event compared with people with the most regular sleep patterns. The research was published online on March 2 in theJournal of the American College of Cardiology.

Even when researchers eliminated shift workers, who have the most variable schedules of all, they found the same results. The association was the strongest for minority populations, particularly African Americans.

The authors conclude that a “deviation greater than 90 minutes for either sleep duration variability or sleep onset timing variability was consistently associated with higher CVD risk.”

Like many systems in the body, the cardiovascular system relies on our circadian rhythms to maintain normal functioning. Blood pressure, for example, goes down at night, rises sharply before we wake up, and is generally highest midmorning. Morning is also a time when people are more prone to suffer from heart attacks, strokes, and sudden cardiac deaths, experts have found.

While the researchers aren’t sure of the exact biological mechanisms behind the sleep irregularity/CVD link, harmful disturbances in these important circadian rhythms are likely to blame. Circadian disruptions influence the rhythms of the autonomic nervous system, which directly governs normal cardiac functioning, the researchers observe, and irregular sleep habits can also affect a person’s schedule of eating or exercise in ways that are bad for your heart.

To better understand their results, the researchers hope in future studies to look for blood biomarkers that may clarify the apparent link. Larger studies with longer follow-up will also be important to confirm these findings, they note.

It can be tempting to burn the midnight oil when you’re in the middle of a good book or a Netflix binge, or to sleep in on weekends after a late party. But for the sake of your heart, keeping a regular sleep schedule every day of the week — going to bed and waking up roughly the same times — is important for heart health, the study shows.

“In a sense, we should not be surprised that sleep is so important for our heart,” Dr. Ayala says, noting that evolution would have done away with a process that led our ancestors to be vulnerable to predatory attacks for so much of their lives if it weren’t crucial to our health.

Good quality sleep is essential to maintaining overall health, he notes, while poor quality increases the risks of such conditions as diabetes and obesity.

So in addition to improving your physical activity, eating a healthy diet, not smoking, and maintaining a healthy weight, among other things, if you want to lower your risk of heart disease you might want to get into the habit of going to bed and rising on a consistent schedule every day.