The Many Health Benefits of Sunshine and Vitamin D | Wellness | MyFitnessPal 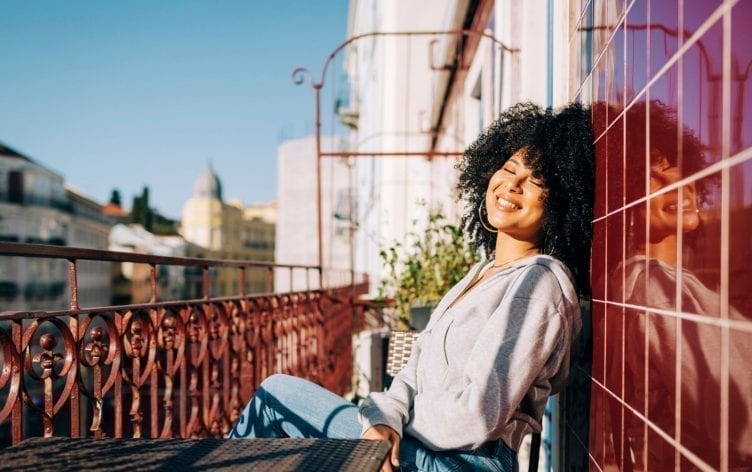 The Many Health Benefits of Sunshine and Vitamin D
No Comments
Share it:
As the coronavirus pandemic stretches on, there’s an understandable focus on boosting our immune systems in meaningful ways, particularly with tried-and-true strategies like sleep , healthy eating and exercise . One more for the list? Sunshine.
That’s because the main advantage of being in the sun is a big uptick in vitamin D, which your body can’t make on its own. Although you can take the vitamin as a standalone supplement, or eat fatty fish, eggs, fortified dairy and mushrooms , the easiest way to ensure you’re increasing your intake is through sun exposure, according to Heidi May, PhD, an epidemiologist at Intermountain Healthcare.
“We continue to learn more and more about vitamin D and its benefits, particularly on the immune system, but in many other ways as well,” she says. “If you’re getting a little sun, in a sensible way, you’re likely also being active, so that’s a double benefit.” Here are some additional advantages you’ll see with time in the sun:
BETTER BODY COMPOSITION
In a recent study , researchers recruited 95 participants, and gave half of them 420 IU vitamin D3 every day for a year, while the other half got a placebo. At the end of the year, lean body mass and percentage of body fat were compared to the data from the year’s start.
They found those taking the supplement had significant increases in lean body mass — which is calculated by subtracting body fat from total body weight — while the placebo group had no changes. Previous studies have also linked vitamin D to improved muscle mass, which means adding a bit more of the vitamin to your daily lineup, either with supplements or sunshine could help with body composition overall.
HIGHER BONE DENSITY
Another study , in Bone Reports, stated that vitamin D has long been touted for its beneficial effects on bone health, and for good reason. Without adequate amounts of the vitamin, people are less able to absorb calcium, according to Dr. Michael Holick, PhD, director of the Bone Health Care Clinic at Boston University Medical Center. This causes bone weakness, especially as people get older and begin losing bone density.
“It’s impossible to overstate how important vitamin D is for the health of your bones,” says Holick. “We see that across all ages, but of course when you get older and are at higher risk for osteoporosis, it becomes even more crucial.”
CANCER PREVENTION AND LOWER BLOOD PRESSURE
While sunlight brings an increased risk of skin cancer, a number of studies have shown associations between sun exposure and lower risks of colorectal, prostate and breast cancer, as well as non-Hodgkin’s lymphoma. Sunshine and vitamin D are often linked to those advantages.
Your heart and cardiovascular system will benefit, too. When sunlight touches skin, a compound called nitric oxide is released into the blood vessels, a process that brings blood pressure levels down — and that can lower the risks of heart attack and stroke .
HAPPIER MOOD AND DEEPER SLEEP
Vitamin D intake isn’t the only advantage of sunshine. Some studies suggest sunlight can prompt a surge of serotonin and endorphins, hormones associated with better moods and more energy. One way to increase this effect is by waiting a few minutes before putting on sunglasses, since serotonin production begins when sunshine hits the retina — but it continues after you put on shades, too.
“Many people immediately notice that they feel better when they go outside and it’s sunny,” says Holick. “That’s not just the warmth, but the light that causes your whole system to respond in a beneficial way.”
Getting sun exposure during the day also puts you on track for more effective production of melatonin, the hormone that helps you sleep . Your body is more efficient at recognizing when it’s evening after receiving some sunshine-fueled input during the day.
HOW MUCH DO YOU NEED?
In general, you only need about 10–20 minutes of sunshine per day to get your daily dose, says Holick: “There are advantageous biological processes that occur with sunshine that you won’t get by taking vitamin D supplements.”
He advises it’s best to get sun on your shoulders, arms or legs instead of your back or face — the former increases cancer risk, and the latter ups your wrinkle and blemish risk. Use sunscreen after you get your initial exposure, he adds.
You can also get a boost from foods that are rich with vitamin D, such as salmon, tuna, eggs and mushrooms. You’ll see the vitamin added to milk, too, because it makes the calcium in dairy more easily absorbed.
If you opt for supplements, there’s still some debate on how much vitamin D you need daily. The recommended daily allowance is 600 IU, but the Endocrine Society suggests consuming potentially much higher levels of 1,500–2,000 IU daily. If you’re concerned you may be deficient, May said, it’s advisable to get your levels checked at your next physical.