Nutrient Deficiency: The 7 Most Common Deficiencies + 11 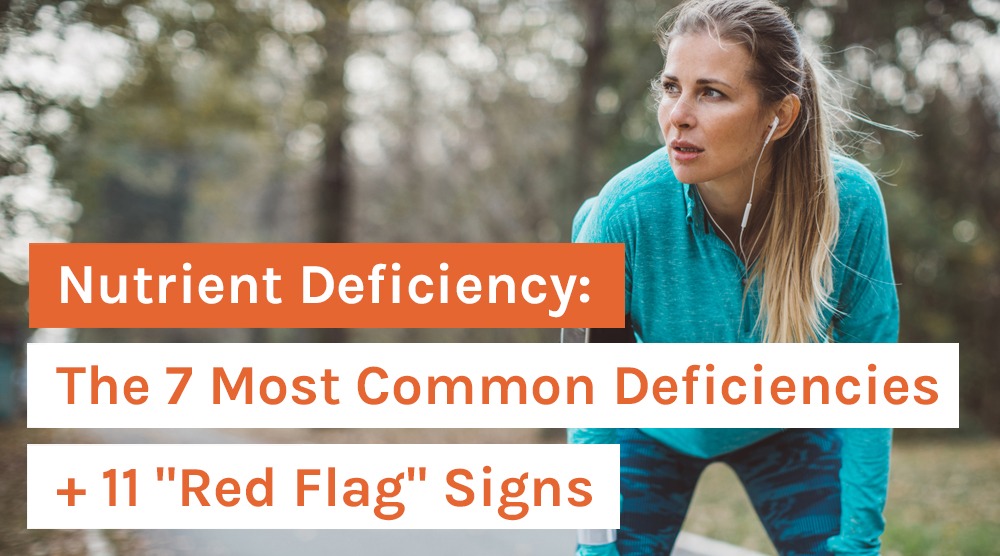 There was a time not too long ago when human beings were able to extract the majority (if not all) of the vital nutrients we needed for good health from the food we ate and our outdoor-focused, active lifestyles.

It is a sad fact that in these modern times, this is no longer the case. In fact, a 2006 study published in the Journal of the International Society of Sports Nutrition found that food alone doesn’t cut it when it comes to getting all the nutrients the body needs. Of the 70 healthy athletes analyzed by the study researchers, every one of them was deficient in at least three essential vitamins or minerals.

If top athletes (who are oftentimes obsessed with good nutrition) can become nutrient deficient… what does that say for the rest of us more than a decade later?

Ironically, the nutrients we’re most deficient in are also some of the ones that are the most important for overall health. Here is a brief rundown of what they are and what they do:

According to the World Health Organization (WHO), the most common nutrient deficiency in the world is iron deficiency as well as the number one cause of anemia in women and children.

Iron is a necessary component of hemoglobin in blood; this substance is what transports oxygen from the lungs via the circulatory system. On the other hand, studies have shown that too much iron may raise your risk of cancer and heart disease.

Experts recommend that individuals who think they may be iron deficient first consider getting a serum ferritin test. Recommended safe levels are usually between 40 and 60 ng/ml.

According to a 2009 report from the U.S. Department of Agriculture (USDA), a whopping 86% of the American population does not meet the U.S. recommended daily allowance (RDA) for vitamin E. [In perplexing contrast to this government data, diagnosed cases of vitamin E deficiency – i.e., α-tocopherol concentrations of less than 12 μmol/L (516 μg/dL) in adults – is rare.]

Vitamin E is a nutrient that is found in many foods, such as avocados, broccoli, and almonds. In the body, it acts as a powerful antioxidant and immune system booster. Vitamin E is also the “ambassador and translator” for cells, helping them to communicate effectively with one another.

Vitamin A is essential for healthy skin, teeth, bones, and vision. Most importantly, however, vitamin A helps to maintain the integrity of cellular membranes.

Beta-Carotene, the “pre-vitamin” for vitamin A, comes from fruits and vegetables as well as in quality multivitamins. In order for the conversion process from beta-Carotene to retinol (the absorbable form of vitamin A) to occur, a person needs a strong digestive tract and a healthy gallbladder.

According to data from the World Health Organization (WHO), vitamin A deficiency is the leading cause of blindness in children worldwide.

Vitamin D gets a lot of press these days linking it to breast cancer prevention. The American Association for Cancer Research (AACR) reported back in 2008 on a meta-analysis of four studies examining the link between vitamin D levels in the blood and breast cancer risk. One study found that sufficient levels of vitamin D led to a 80% reduction in breast cancer!

As reported by the AACR:

Vitamin D, which is more of a hormone than a vitamin, is essential for health in other ways too – especially as a helper for other vitamins. For instance, vitamin D is intricately connected to the absorption of vitamin A, vitamin K, and calcium.

The current worldwide epidemic of vitamin D deficiency is caused in part by our modern work and lifestyle choices, which does not leave much time for enjoying the sun outdoors.

The latest studies suggest that roughly 68% of all Americans are deficient in magnesium and up to 20% may suffer from severe deficiency.

The list of essential functions in the body that magnesium is responsible for is long. It includes:

Magnesium deficiency has been linked in studies to higher risk of cancer as well as cognitive breakdown and heart disease.

When you were a kid, you probably heard someone in your family say, “Come take your vitamin C!” whenever you had a cold. That advice wasn’t that far off. Vitamin C (ascorbic acid) is a necessary nutrient for immune system health. It is also important for the cardiovascular system since it is needed for the absorption of iron from food.

Vitamin C is also a powerful antioxidant which helps in the formation of collagen and wound healing. Surveys from the U.S. and Britain found that vitamin C deficiency occurs in 1 in 5 men and 1 in 9 women.

A 2004 report by the American Centers for Disease Control stated that vitamin C “may be the most important water-soluble antioxidant in human plasma” and that 13% of Americans are notably deficient in it.

Vitamin C must come from either food or supplementation; the body does not create vitamin C on its own.

There are 8 B vitamins in all and all of them combined influence just about every single mechanism in the body. Getting enough vitamin B12 is especially important for the nervous system and brain health.

According to researchers at Tufts University, about 40% of adults have B12 levels below the normal range. Deficiency in this vital nutrient can lead to depression and other mental disorders, loss of the senses like taste and smell, cognitive decline, anemia, neuropathy in the hands and feet and cardiovascular issues.

Deficiencies in other B vitamins, such as B1, B2, and B6, are also quite common.

The body needs essential vitamins and minerals to complete the thousands of second-by-second functions it performs for health. Everything from maintaining good gut balance to keeping your heart pumping is reliant on the efficient break-down and use of nutrients.

“I eat a healthy diet,” you may be thinking, “so I have nothing to worry about, right?”

There was a time when this was true, but no longer. Even if you are someone who eats healthy, organic food every day, you can still have nutrient deficiencies.

First of all, because of poor soil, contaminants in the air and water, and an increasingly genetically modified food supply, the nutrient load of most produce is significantly less than it used to be.

A report published in 2004 by the University of Texas studied the nutritional value of 40 common fruits and vegetables grown in the U.S. between 1950 and 1999. What they found was shocking.

Over those 40 years, all of the foods they studied had “reliable declines” in key nutrients, including calcium, iron, vitamin C, and B vitamins.

The second reason has to do with malabsorption of nutrients within the body itself. Even if you are consuming great quantities of key essential nutrients, your body may not be able to absorb them properly in order to put them to work in your body.

All of these factors, including the expression of your genes, are influenced by one thing: lifestyle.

Diet, stress level, exercise level, hydration levels, and the quality of any supplements you are taking all play a part in malabsorption.

Nutritional deficiency tests, including blood, saliva, and urine tests, can be very beneficial in letting you know if you are low in a particular vitamin or mineral.

But before you ever send anything to the lab, sometimes you can determine if you have a dietary deficiency by watching for nutrient deficiency symptoms and signs in your own body.

According to functional nutritionist and best-selling author Dr. David Jockers as well as other experts, the following symptoms may be “red flags” for nutritional deficiencies:

Once you’ve determined you have a nutrient deficiency, the likely next step is supplementation. When deciding on a supplement manufacturer, be aware that many companies still use synthetic ingredients and chemical additives to keep costs (and quality) down.

In fact, it is estimated that up to 95% of all vitamin and mineral supplements out there are at least partially created using synthetic materials!

The happy news is that consumer demand is growing for quality products which utilize the very latest in natural health technology.

If you decide that supplementation in one or more key nutrients is right for you, be sure to do your homework. Choose a whole food brand that is organic and tests their products regularly for toxins including heavy metals and pesticides such as Organixx Multi-Vita-Maxx.