Risks and Benefits to Consider Before Trying Keto 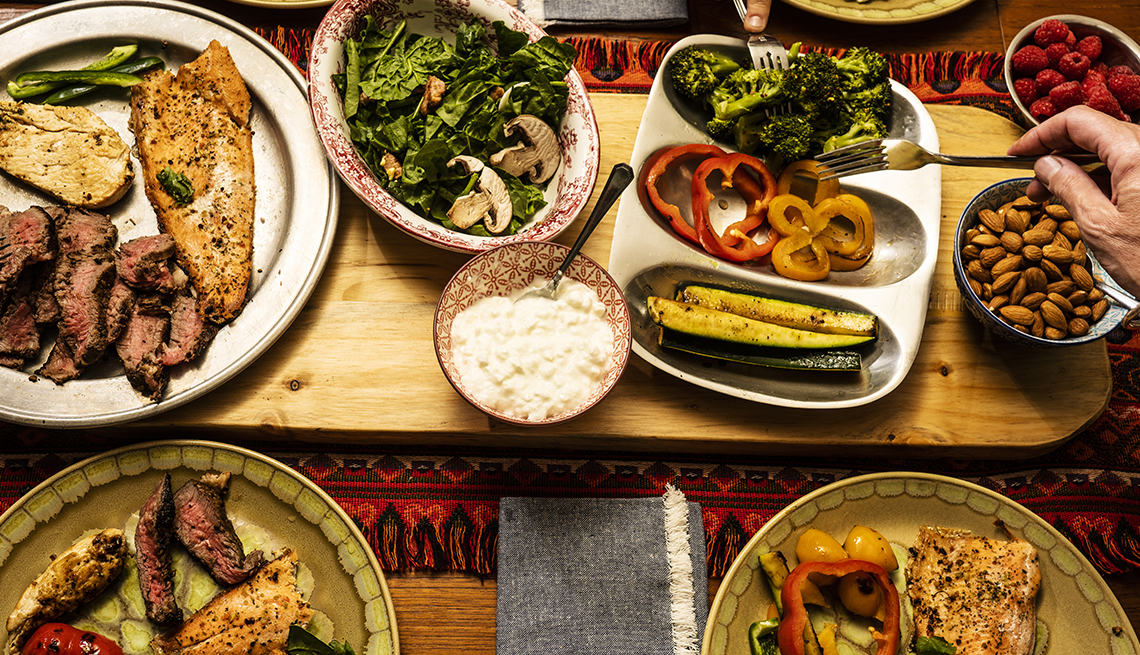 For expert tips to help feel your best, get AARP’s monthly Health newsletter.
Do keto diets work?
Yes and no. In a study published this year, volunteers who went on a ketogenic diet for three months lost 17 pounds and 5.1 percent of their body fat, on average. And a yearlong study published in Diabetes Therapy found that a daily carbohydrate cap of 30 grams — about what you’d get from a banana — could help people lose 12 percent of their body weight on average.
But while these results sound promising, they may have nothing to do with whether or not people achieve ketosis. “The diet is very monotonous,” Prado says. “There just isn’t much that you can eat, so of course you end up eating less.” When government researchers designed a study to hold calorie intakes constant, they found no advantage to keto versus a balanced diet with carbohydrates. And a review of 23 randomized controlled trials found no difference in body weight between those on low-carb and high-carb diets.
Plus, much of what people lose in ketosis, at least initially, is water weight. Sugar stored in your body is bound with H2O. So when you start cutting carbs, your body grabs that sugar and releases the water. “People think they’re losing fat, but they’re actually rapidly losing water,” Prado says.
GETTY IMAGES
Can Keto Halt Cognitive Decline?
Your brain on sugar
• Like the rest of your body, your brain runs largely on sugar, says Cunnane. As the brain ages, neural tissue can sometimes struggle to metabolize that sugar properly, leading to cognitive decline.
Your fasting brain
• “Ketones are actually its preferred source of energy,” Cunnane says. With as little as 12 hours of fasting, your brain begins shifting toward ketone metabolism, and as ketosis ramps up, ketones can supply more than 60 percent of your brain’s energy, which helps it overcome the problem of sugar metabolism.
Your brain on fat
• In a study, Cunnane and his colleagues gave 19 cognitively impaired subjects — average age 75 — two daily drinks containing medium-chain triglycerides (MCT), a fatty acid that converts into ketones more efficiently than the mixed fats in food sources.
• In six months the subjects’ language skills, processing speed and executive function improved significantly, and they scored 54 percent higher on a test of visual memory.
And the caveat
• There’s no evidence that ketones will have the same cognitive-boosting effect on normal, healthy brains that process glucose properly, says Cunnane.
Are keto diets appropriate for people with diabetes?
Talk to your doctor about it, but studies have shown that keto diets can help people improve their insulin sensitivity. “Type 2 diabetes can be controlled with a ketogenic diet,” says Cunnane. A review of studies in the  International Journal of Diabetes and Clinical Research  concluded that keto diets “should be taken into serious consideration as a possible standard therapy in the future treatment ... of diabetes.”
But again, following a keto diet is difficult. For diabetics, it’s best done under a doctor’s supervision. “This is a prescription-strength diet,” says Eric Westman, an associate professor of medicine at Duke University in Durham, N.C., and the cofounder of Heal Clinics, a company that used dietary ketosis to treat type 2 diabetes. ( Virta Health is another company that does this.)
Can a keto diet help fight cancer?
There is some positive evidence. Cancer cells predominantly eat glucose; some cancer cells can’t metabolize ketones. “With a ketogenic diet, we may be able to essentially starve cancer cells,” Prado says. In studies on animals, researchers have shown that fasting or severe restrictions on carbohydrates can slow or halt the growth of some tumors. Small studies on humans suggest this might prove to be a useful supplement to radiation and chemotherapy. But the research is still too young to say for sure. “The results are promising,” Prado says. “But they’re not consistent. And it’s really difficult to have people follow the diet.” Until there is better data, it’s too early for experts to make sweeping recommendations for cancer patients who are already undergoing difficult treatment plans.
So, should you try it?
If the keto diet sounds difficult and complicated — well, it can be. Even in Westman’s clinic, where patients were trying to beat diabetes with the help of professionals. about 50 percent of patients dropped out within a year. And some researchers are concerned about the potential for things like kidney stones, renal damage and elevated LDL cholesterol. Others warn about “keto flu” — an electrolyte imbalance that often affects people on the diet.
But for older adults, the biggest risk of fasting or keto dieting is the fact that you’re often depriving your body of the protein it needs to build and maintain muscle mass. “To build muscle, older people need more protein than younger people,” Prado says. “With the ketogenic diet, you have a maximum amount of protein you can eat — usually only 15 percent of your calories.”
So if you’re eating 2,000 calories a day, you’d be allowed only about 300 calories, or about 75 grams, worth of protein. That’s considerably less than what Prado recommends for the average 180-pound person who wants to avoid frailty, falls and fractures. One 10-week study of a group of men over 70 found that those who ate the recommended daily allowance (RDA) of 0.8 grams of protein per kilogram of body weight (about 65 grams for a 180-pound person) lost muscle, while those eating twice that amount added muscle around their midsections and improved their leg strength.
Cutting protein to “go keto” means potentially sacrificing muscle mass — and that’s a big trade-off to burn a little bit of belly fat. Bottom line: Talk to your doctor first, and approach keto diets carefully and cautiously.
More on Healthy Living