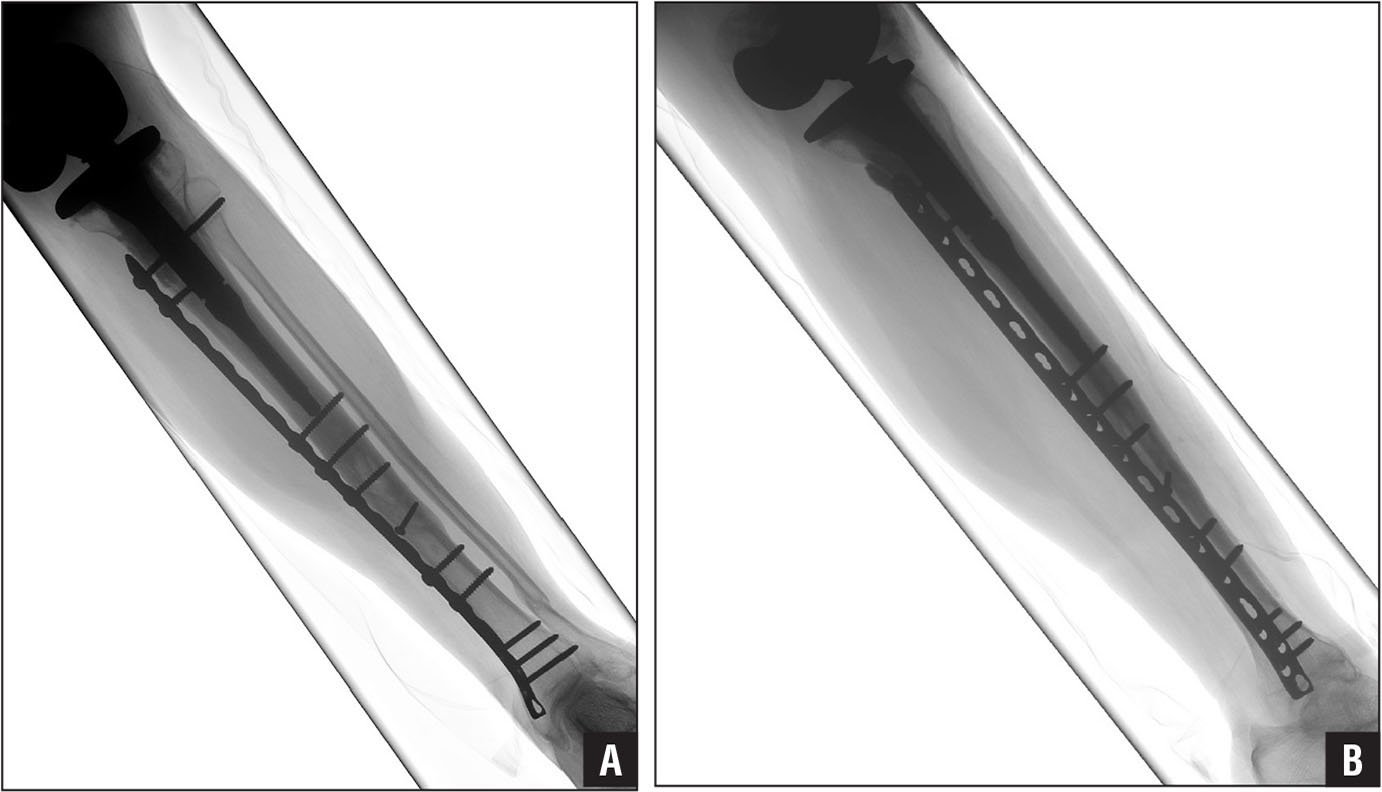 Periprosthetic fractures around total knee arthroplasties (TKAs) are well documented in the literature, with rates ranging from 0.3% to 2.5% after primary TKA and 1.6% to 38% following revisions. Of these, supracondylar femoral fractures are the most common, with periprosthetic tibial fractures occurring much less frequently, with reported rates of 0.4% to 1.7%. With more than 300,000 TKAs performed annually in the United States, and this number continuing to rise as activity demands increase and implant and patient survival improve, periprosthetic fractures of the tibia will likely rise in incidence. Contrasted with other fractures, periprosthetic fractures are often difficult to treat and associated with significant morbidity. They are complicated by such factors as poor bone stock, previous soft tissue injury, implant loosening and instability, and preexisting implant and cement, which may impede successful reduction and placement of fixation devices. These factors pose significant reconstructive challenges to the treating surgeon and pre-dispose to malunion or nonunion. Due to the rarity of periprosthetic fractures of the tibia, there is a paucity of information concerning clinical and radiographic outcomes following open reduction and internal fixation (ORIF) of these complicated fractures.

The current literature largely bases treatment of periprosthetic tibial fractures on recommendations made by Felix et al in 1997. From their review of 102 periprosthetic tibial fractures after TKA at a tertiary care center from 1970 to 1995, the Mayo classification system was created. This classification consists of 4 major types (I–IV), with each having 3 associated subtypes (A, B, and C). Type I is a tibial plateau fracture of the tibial tray-to-bone interface. Type II represents a fracture adjacent to the stem. Type III designates a fracture distal to the prosthesis. Type IV identifies a tibial tubercle fracture. The associated subtypes consist of a well-fixed prosthesis (A), a loose prosthesis (B), and intraoperative fracture (C). The vast majority of the fractures in their series were type I (60%), which is much less common currently due to improvements in component design. Moreover, treatments of these fractures are predominantly focused on stability of the implant and displacement of the fracture, which govern whether nonoperative or operative treatment should be used. With modern implant designs, improved outcomes with operative stabilization in the setting of stable implants with varying degrees of displacement for the less reported type IIA and IIIA fractures are largely unknown because the more recent literature has been limited to reviews, expert opinions, and case reports. The most notable recent advance in the literature regarding the injury is the Unified Classification System (UCS), which is essentially a modification of the original Vancouver classification of periprosthetic hip fractures.

Institutional review board approval was obtained prior to initiation of the study. A retrospective review of a prospectively collected database revealed 19 patients who had a periprosthetic fracture of the tibia around a TKA from 2008 to 2014. All 19 patients underwent operative fixation by 1 of 5 fellowship-trained orthopedic trauma surgeons. Patients were followed at regular intervals with clinical and radiographic evaluation, and the authors not involved with their initial care retrospectively reviewed these data. Four of these patients were lost to follow-up before 1 year, and 1 patient died in the hospital as a result of the constellation of injuries; these 5 were excluded from final analysis, leaving a total of 14 patients for analysis. Each of the 19 patients underwent fixation using plate and screw instrumentation according to the injury pattern as well as soft tissue consideration. All fixation constructs included a single plate and locking and nonlocking screws in a hybrid construct concept (Figures 1–2); there was no use of cables, allograft, or other fixation adjunct products in this series. All patients were allowed immediate range of motion (ROM) of all joints of the lower extremity postoperatively, with weight bearing proceeding according to surgeon preference but not beginning earlier than 4 weeks postoperatively in this series. Anteroposterior (A) and lateral (B) radiographs of a 66-year-old woman with a previous total knee arthroplasty who presented after a fall and had sustained a Felix type IIIA fracture. The implant-stable Felix type IIIA fracture can be seen. Anteroposterior (A) and lateral (B) radiographs of the 66-year-old woman of Figure 1 at 14 months after stabilization with locking screw and plate technology with a hybrid combination of locking and nonlocking screws. Statistical analysis was performed, with means, ranges, and confidence intervals calculated for continuous variables and compared using the Student's t test. Frequencies were calculated for continuous variables and compared using Fisher's exact test for increased accuracy in small proportion analysis. P