The Link Between Your Brain And Ankle Instability Treatment 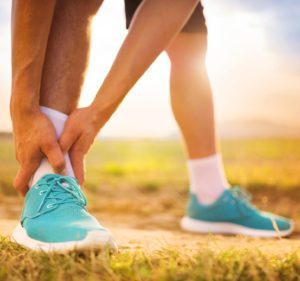 New research out of Appalachian State University suggests that a physical injury may require your brain to work harder to perform certain functions with the injured area.

For the study, Dr. Alan Needle, associate professor in the Beaver College of Health Sciences’ Department of Health and Exercise Science, partnered with graduate student Amelia Bruce to take a close look at how the brain is impacted by injuries to other areas of the body. Needle’s previous research on the subject found that the brains of people with ankle instability required more activation to perform simple movement tasks with the injured foot. They took this information and sought to learn whether treating the brain could also help to treat ligament injuries.

For the study, 26 individuals with ankle instability were divided into two groups. Half of the group received an electrical current through their brain during ankle strengthening therapy, while the other group received a placebo current. After conducting some tests at the end four weeks, researchers found that individuals in the strength training with electrical current group showed better balance, muscle activation and perceived function compared to the control group.

Researchers say this was the first study to show that treatments that target the brain can improve neural function in patients with injuries, and that improving neural function leads to better ankle function and perceived patient outcomes.

“This topic was of importance to me because injuries in ligaments happen every day. If this intervention worked, it could reshape how clinicians treat these types of injuries during the rehabilitation phase,” Bruce said. “While clinicians primarily treat the musculoskeletal side (during the rehabilitation phase), there is a whole neural system that is impacted by these injuries and needs just as much attention during treatment.”
Dr. Silverman Comments

A number of studies have found similar results in that patients can experience a delay in the return of an unconscious reflex response in the wake of a ligament injury. We see this most commonly in ACL reconstruction where the time to full return of function may take up to two years. Personally, I believe this is due to the time it takes the brain and the spinal cord to learn to coordinate through the new nerve endings that grow in the healing ligament at the later stages of tissue repair.

However, this study takes our understanding a step further by focusing on how electrical brain stimulation can help with ligament recovery from ankle instability. Perhaps this technology enhances the neurologic repair and allows this patterning and reinforcement to start earlier. Very exciting.