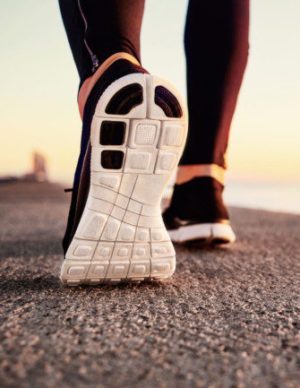 When it comes to running, researchers are always looking for new ways to protect our feet and keep us injury free. They are always testing and tracking which shoe features reduce injury rates, and researchers recently turned their attention to what’s known as the drop ratio – the difference in height between the heel and forefoot.

Minimalist shoes have a low heel, meaning they often have very low drop rates, while shoes with extra cushioning in the heel tend to have a higher drop rate from the heel to the toe. Evidence for one type of drop rate over the other is up in the air. Proponents of a minimalist shoe say the low drop rate encourages a forefoot strike, which is less taxing on the heel. Others say a thicker and more cushioned heel can help prevent injury, even if a heel strike is used. Researchers wanted to examine shoe drop rates and see if one drop height proved safer that the other.
Foot Drop Study

For their study, researchers recruited 533 recreational runners to participate in a six month study. Runners were split into three groups:

Other than the shoe height drop, the shoes were identical to each other in every other way. Runners were asked to run a couple times a week for a period of six months and report any injuries that prevented them from running for at least one day.

At the conclusion of six months, researchers noted that 25 percent of runners reported an injury. Unfortunately, the results didn’t point to any concrete findings, as injury rates were similar between the groups. Essentially, researchers stated that the findings point to the notion that runners should find a shoe with a drop that is most comfortable to them. That being said, if a runner has a prior foot condition, a shoe with a certain foot drop may be beneficial.

“As a general rule, if someone has forefoot pain such as a neuroma, or arthritic changes in the big toe joint, then I recommend trying a lower-drop shoe,” said Brian Fullem, author of The Runner’s Guide to Healthy Feet and Ankles. “If someone has heel pain from plantar fasciitis or Achilles or posterior tibial tendonitis, then I recommend a more traditional heel drop of 12 millimeters.”