Ankle Fractures Can Be Death Sentences For Seniors 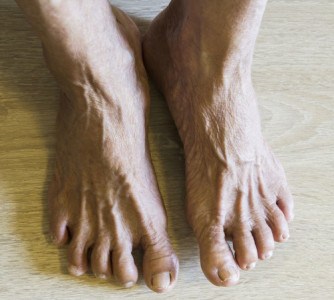 New research presented in the Journal of Foot and Ankle Surgery suggests that ankle fractures can essentially be a death sentence for elderly individuals.

For the study, researcher Dr. Corey Rosenbaum and colleagues decided to see if “low energy” open ankle fractures had an impact on a senior citizens’ life expectancy. “Low energy” open ankle fractures were classified as compound fractures of the ankle resulting from everyday, low-impact activities, like tripping on a step, falling off a curb or stepping wrong and bringing your weight down on an awkwardly positioned ankle. This is a clear distinction from high-impact ankle fractures, which are more common during car accidents or athletic activity.

Dr. Rosenbaum said his interest in looking for a possible correlation stemmed from the fact that he began to notice a high mortality rate among senior citizens who suffered an ankle injury. So he and his team looked at a collection of senior citizens, with the average age being 72-years-old, who had suffered a low energy open ankle fracture.
Ankle Fractures in Seniors

After looking at the data, Dr. Rosenbaum and colleagues concluded:

Most had other health issues that needed to be closely controlled. 82 percent had hypertension, 73 percent had diabetes, 50 percent had chronic obstructive pulmonary disease, nearly half had heart disease and 25 percent had congestive heart failure.

Researchers believe the reason why ankle fractures lead to death in so many cases is two-fold. First, because open fractures are very severe, doctors believe it takes too heavy a burden on the elderly, and it eventually becomes too much to overcome. Secondly, researchers say the other health issues often complicate the ankle’s healing process, and sometimes patients never leave the hospital bed after an ankle fracture.

Dr. Rosenbaum and his team concluded that seniors should work on ankle strengthening and mobility exercises to reduce their risk of falling and injuring their ankles. As we’ve seen before, staying active as you age is key!
Dr Silverman Comments

Thus patients who have ankle fractures are generally healthier and more active than those with hip fractures and they are much more likely survive their injury. It’s the small subset with open ankle fractures from low energy injuries that we know from this study that have more troubles. Identifying this population, decreasing their injury risk or using the injury as a warning sign that something more is going on with this patient is key to helping them get back on their feet.