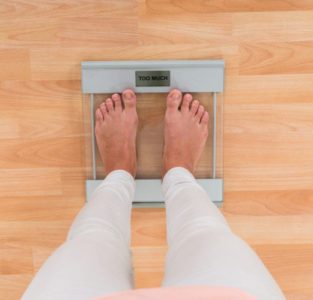 New research presented at the American College of Rheumatology Annual Meeting revealed that having more weight throughout your lifetime was associated with an increased likelihood of developing a variety of different foot conditions.

For their study, researchers examined 28 different weight measures over the course of 57 years to identify trajectories of weight in roughly 2,500 individuals who were taking part in the Framingham Foot Study. The foot study was examining rates of foot problems, such as foot pain, hallux valgus, claw toes, hammer toes and overlapping toes, and the subsequent weight review allowed researchers to look for relationships between lifetime weight gain and foot injuries.
Weight and Foot Problems

After examining all the trajectories, researchers grouped individuals into one of five groups. Although a presentation at the annual meeting didn’t dive into specifics about the five groups, weight increased from Group E to Group A, meaning that individuals in Group E had a healthy BMI, and scores increased throughout the rest of the groups with Group A being the most overweight for their age.

Here’s a look at some the findings:

Individuals in Group E had the lowest prevalence of foot pain at 14 percent.

Individuals in Group A had the highest incidence of foot pain at 22 percent.

Individuals in Groups A, C and D were more likely to develop claw toes.

Individuals in Groups A and D were more likely to have hammer toes compared to Group E.

After looking at the data, researchers concluded that having excess weight was linked to a greater risk of developing foot problems throughout a person’s life, and that people can reduce this risk by working to lose weight.

“These results provide evidence that having a lower weight over one’s lifetime can reduce the likelihood of foot problems,” said Dr. Alyssa B. Dufour, instructor of medicine at Harvard Medical School, who presented the study findings at the ACR annual meeting.

It’s no surprise that excess weight is linked to more foot problems, as that is more stress your feet need to handle with each step. Work towards a healthy weight, and your risk of needing to visit my office will decrease!