Bad Break For The Wild As Suter Fractures Fibula 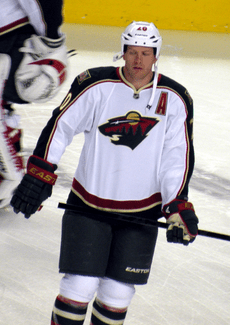 The Minnesota Wild will be without star defenseman Ryan Suter for the foreseeable future after he suffered a fractured fibula in Sunday’s loss to the Dallas Stars.

The Wild are currently awaiting the MRI results to learn how long Suter may be out, but if he is dealing with a fractured fibula, it seems likely that he will miss the remainder of the season. It generally takes about six weeks for a fibula fracture to heal, and even if he’s able to bear weight at some point in his rehab, it’s going to take longer for him to return to NHL-level fitness.

If we look at the NHL calendar, last year’s Stanley Cup Finals began on May 29, and if we assume a similar timeline, then we are about eight weeks away from the start of the Finals. It’s conceivable that Suter could be back to full health and game-ready conditioning, but that’s assuming he’s dealing with simple fracture. If there are other issues, like a complex fracture or ligament damage, his recovery could extend beyond the end of the playoffs.

Carson Soucy is set to make his NHL debut now that the Wild are shorthanded on the blue line.

Suter’s Fractured Fibula
Again, the MRI should tell us a little more, but we can take a look at other fractured fibulas in the NHL to help project Suter’s recovery. For that, let’s look at Mika Zibanejad.

Zibanejad suffered a fractured fibula back on November 10, and the team determined that he did not need surgery to address the fracture. Initial reports for Suter suggest the same, that surgery is not a necessity. Zibanejad’s recovery timeline was put at 6-8 weeks, and he eventually returned to the lineup on January 16, two months and six days after suffering the injury. He missed 25 games, but his recovery was always considered on track, and he cleared the necessary protocols at the expected intervals along the way. Put another way, he didn’t have any setbacks.

So if we assume that Suter has a similar fracture and rehabilitation, two months and six days would put his return around June 9th. The NHL playoffs have some fluid scheduling unlike the NFL, but the NHL notes that the Stanley Cup Playofs can be expected in early June. Could Suter try and fast track his recovery and make it back in the middle of the Stanley Cup Finals? It’s certainly a possibility, but more likely than not his season is over. If the Wild are playing well enough to make it to the Finals without Suter, they may not be keen on rushing him back if they don’t feel he’s 100 percent healed and conditioned.

Hopefully the Wild can rally around his injury and make a charge in the playoffs.