The Key To Avoiding “Trampoline Ankle” 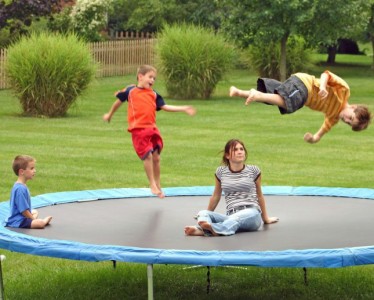 Researchers out of Canada say that high-impact trampoline injuries can be catastrophic to children and young adults, and they’ve got some great advice for parents who want to keep their kids injury-free.

Although trampolines can be a lot of fun, unfortunately they are also the source of many bumps and bruises. Oftentimes these injuries are the result of contacting another jumper while on the trampoline, landing on the edge or springs, or from launching off and landing on the ground.

But according to Canadian researchers, there’s another situation that can lead to a severe ankle fracture on a trampoline. Although the surface of the trampoline may look soft and rubbery, researchers said the surface can turn as hard as cement when the surface is depressed down from the force of a jump. You’re not susceptible to this situation if you’re jumping alone, but if you’re jumping with a friend and get out of sync, you can end up in a world of hurt from “trampoline ankle.”

Dr. Luke Gauthier, an orthopedic surgeon who worked on the study, said the force when hitting the mat can become “equivalent to falling from a building,” which can cause permanent bone damage if a person lands at the wrong time.
Trampoline Ankle Study

In a systematic review of severe fractures that occurred on a trampoline, researchers polled patients to see if they were jumping alone or with at least one other person when the fracture happened. Although they only examined 11 instances of severe fractures, they uncovered that in nine of the 11 cases, more than one person was jumping on the trampoline at the time of injury.

Dr. Ron El Hawary, who also worked on the study, concluded that parents should use caution when deciding if more than one child can jump simultaneously.

“Our word of warning is one child on the trampoline at the same time.”