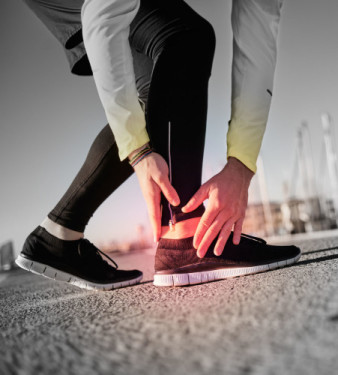 School is under way, and that means college campuses are full once again. Last week we shared some tips on how college students can avoid gaining weight by staying active on campus, but now we’ve learned of a related study that can help students stay active.

According to new research, college-aged students who suffer from chronic ankle instability (CAI) have lower levels of activity than students without instability.

To determine how chronic ankle instability affected a college-age persons activity level, researchers recruited 80 college students. Half of the group was plagued by chronic ankle instability, which was diagnosed though the Foot and Ankle Ability Measure survey, while the other 40 students acted as a control group. Each group was given a pedometer to record their daily step count over the course of one week.

After looking at the pedometer readings, researchers uncovered:

Students with chronic ankle instability had lower overall activity levels than students in the control group.

The findings are important because it shows direct evidence that ankle instability can make you a less healthy individual through activity limitations.

“It would be interesting to see if treatments that improve symptoms among patients with CAI also result in increases in activity levels,” said researcher Nicole Cattano. “Research on intervention programs or long-term changes after ankle sprains would provide valuable information about this.”
Dr. Silverman comments

This is a wonderful study that shows the correlation between ankle instability and a reduction in physical activity. If you feel like you have a glass ankle that could roll on contact with a bumpy surface, it seems likely that you may not go for a run as often as people with no qualms about their ankles, and this study actually helps prove that idea.

Obviously I would have liked it if the study have been completed with a larger test group, but I still believe the findings are worthwhile. Ankle Instability surgery and ligament surgery are some of the most common surgeries we preform at Silverman Ankle & Foot, and I’ve seen firsthand how a stable ankle can change a person’s life.

If you feel like you have weak ankles, speak to a foot specialist. They can help develop and strengthen your ankle muscles through a variety of stretches and exercises, and if all else fails, they can walk you through what to expect from ankle instability surgery.