What Your Feet Can Tell You About Your Personality 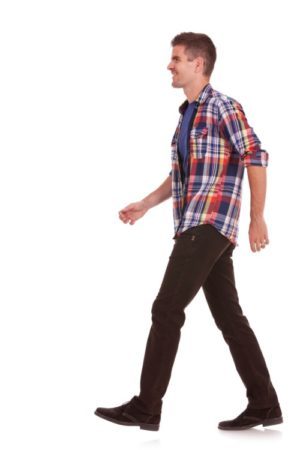 A lot of times you can’t tell much about a person until you have a conversation with them, but new research from across the pond says you can tell a lot about a person by the way they walk.

According to researchers from the University of Portsmouth, there exists some clues as to how aggressive a person can be based on how they walk. For their study, researchers assessed the personalities of 29 individuals before using motion capture technology to record them walking on a treadmill at their natural speed. Personalities were self-assessed using a questionnaire and a standard personality test that measured certain traits like openness, conscientiousness, extraversion, agreeableness and neuroticism.
Gait and Personality

The team found that every walker displayed similar styles and nuances, but they found that individuals with what they deemed “exaggerated movement” of both the upper and lower body were more likely to have an aggressive personality.

“When walking, the body naturally rotates a little; as an individual steps forward with their left foot, the left side of the pelvis will move forward with the leg, the left shoulder will move back and the right shoulder forward to maintain balance,” said lead researcher Liam Satchell. “An aggressive walk is one where this rotation is exaggerated.”

Satchell added that people often unknowingly jump to conclusions about other people based on their posture or gait, but this study confirms that you can actually learn something about a person by the way they walk.

“People are generally aware that there is a relationship between swagger and psychology. Our research provides empirical evidence to confirm that personality is indeed manifest in the way we walk,” said Satchell. “We know of no other examples of research where gait has been shown to correlate with self-reported measures of personality and suggest that more research should be conducted between automatic movement and personality.”

They concluded that aside from sizing up a person as they are walking towards you, the findings have interesting real-world applications. Although it may be considered profiling, Satchell said law enforcement could benefit by identifying aggressive individuals.

“If CCTV observers could be trained to recognize the aggressive walk demonstrated in this research, their ability to recognize impending crimes could be improved further.”