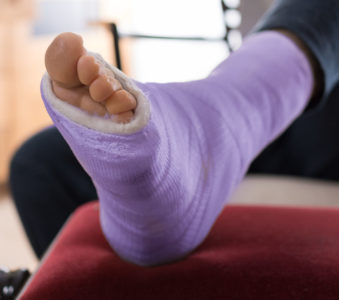 New research published in The BMJ suggests that the traditional belief of six weeks of casting after an ankle fracture may be incorrect, and patients could actually benefit from a shorter casting period.

For their study, researchers examined nearly 250 patients at two major trauma centers over the course of five years. Subjects were at least 16 years old, and the average age was 45. All of the patients had sustained a stable ankle fracture, meaning it did not require surgery in order to heal correctly. Participants were randomly assigned to one of three groups:

Participants were evaluated six weeks, 12 weeks and one year after their initial appointment and their symptoms and overall recovery was assessed. Measures were taken for pain scores, quality of life, ankle range of motion and the patient’s overall satisfaction with recovery.
Study Results

At the one year follow up, researchers were able to determine that individuals who were in the three-week casting or bracing group were no worse off than those in the six-week casting group. In fact, researchers actually recorded a slight increase in the mobility of the ankle in patients in the three-week groups compared to the six-week section. No other significant differences were found between the groups.

Although it was not shown to be the case in the study, there have also been some risks associated with prolonged casting for certain injuries. For example, area stiffness, skin damage and blood vessel blockages are all more likely to occur the longer someone remains in a cast. Based on the findings, we may be able to reduce the risk of such ailments, and get people out of a cast sooner because, as researchers concluded, ankle fractures that do not require surgery could be more successfully treated with a shorter stint in a cast or brace than originally thought.

We’ve always believed that earlier mobilization is key to improving range of motion and speeding up healing time after an ankle fracture, so it’s nice to see medical research come to the same conclusion. Movement helps to increase blood flow to the area, and weight bearing can help to re-strengthen muscles groups that haven’t been used as frequently due to the injury. Each patient needs to be treated on an individual basis based on their specific fracture, but it’s clear that you may no longer need six weeks in a cast to experience the best recovery after a stable ankle fracture.