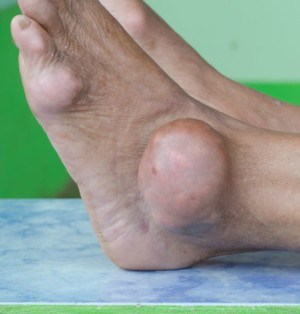 We’ve discussed how some foot conditions can lead to other related issues on the blog before, and new research out of the UK has linked another foot problem to a dangerous heart ailment.

According to researchers out of Great Britain, people with gout in their feet may be at an increased risk for atrial fibrillation (Afib). When looking at a collection of health data from people treated for gout, researchers noted that those treated for the foot condition were much more likely to also have Afib compared to the control group.

7.42 percent of people with gout also had Afib. Only 2.98 percent of the control population was diagnosed with Afib.

Another study revealed that after 5 years from the date of diagnosis, about 12% of gout patients developed Afib compared with only 6% of matched controls.

Lead researcher Dr. Weiya Zhang and colleagues did not know exactly why gout was linked to Afib prevalence, but they have some speculations.

“Currently, there is no explicit explanation for the link between gout and Afib,” said Zhang. “The potential mechanism underlying the increased risk of Afib in gout patients is hyperuricemia. Increasing evidence suggests that uric acid participates in the atrial remodeling process that enhances the risk of Afib.”

Researchers concluded that doctors should keep the study in mind, and older patients who develop gout should also be screened for Afib.

“[The study makes] the case for a clinical cardiovascular assessment and inclusion of an electrocardiogram as a part of the initial assessment of gout patients at diagnosis and close observation … for the occurrence of incident Afib, especially for the elderly and those having other Afib risk factors,” they wrote.