Your Feet Can Help Slow Down Cancer Growth 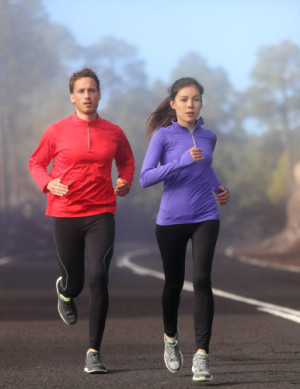 New research suggests that getting up on your feet and going for a run may help slow the growth of cancer cells.

The study, again conducted on a small sample of mice, uncovered that the running-related adrenaline surge mice received during and after a run helped mobilize immune cells in the bloodstream to attack cancerous tumors. Previous studies had already shown that these “natural killer” immune cells (NK) helped to regulate tumor size, but the new study on mice was the first to show that running can aid in the expression of these cells to attack a problematic tumor.

“We already know that exercise has an impact on natural killer cell activity, but this is the first time anyone has shown it’s directly involved in helping them invade tumors,” said Lee Jones from the Memorial Sloan Kettering Cancer Center.
Running Study and Cancer

The second phase of the study looked closer at why the NK immune cells were effective in reducing the speed of the tumor growth. Researchers uncovered that the expression of adrenaline was key. When researchers blocked adrenaline’s functions, they noticed a decrease in the tumor-killing benefits of exercise. Specifically, they noticed that the IL-6 molecule, which signals the NK cell response, is positively affected by the expression of adrenaline.

“In this study we show that the exercise-induced IL-6 seems to play a role in homing of NK cells to the tumor and also in the activation of those NK cells,” said senior study author Pernille Hojman from the University of Copenhagen.

It’s worth noting that exercise and adrenaline expression didn’t reduce the size of the tumor, it only slowed the growth. Researchers say the findings show that while everyone should exercise, cancer patients should try to ratchet up the intensity to ensure the expression of adrenaline. This can be readily achieved by pushing yourself to run father and faster. They hope to use future studies to understand the long-term benefits of exercise and to help doctors better understand treatment options for certain patients with cancer.