Ankles and Calves Key To Maintaining Running Times As We Age 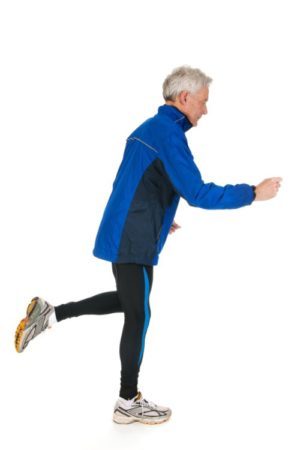 We all tend to slow down as we age, but many people aren’t okay with that fact. One group of people that don’t like to slow down are runners and fitness fanatics. You can continue to exercise five days a week, but as we age, you’ll likely notice that your mile times will slightly taper off. But here’s the good news – a recent study suggests targeting certain muscle groups in your legs can help you maintain your speed as you age.

According to the report, targeting the muscles in your calves and improving the stability in your ankles can help aging runners stave off the slowdown. The study, conducted by researchers at East Carolina and Wake Forest University, uncovered that weakness in the ankles and calves contribute to biomechanical stride changes that slow aging runners. By doing more lower-leg strength and power training, runners may be able to prevent this slowdown.
Running As We Age

For their study, researchers analyzed running styles and stride length between older runners and their younger counterparts. They found that while they both averaged about 165 strides per minute, older adults suffered from significantly shorter strides. Overall, running stride and total speed fell about 20 percent from age 20 to age 59. When looking at the biomechanics of the running groups, the loss of ankle power during this same time frame was nearly 48 percent.

“Our research indicates that aging runners could perhaps maintain their speed through increased calf-muscle strength and power exercises,” one of the study authors, Paul DeVita, Ph.D., told Runner’s World Newswire.

But it’s not just the ankle joint that aging runners should focus on. DeVita noted that the calf muscles also play a pivotal role; Specifically, the soleus and gastrocnemius muscles. He added that although he is not a trained strength and conditioning coach, he believes a combination of slow, heavy-weight strengthening workouts and faster, lower-weight power workouts targeted at the legs should do the trick. However, like we stated in yesterday’s post about changing your running technique, any workout changes should be slow and gradual so as not to overstress certain muscle groups.