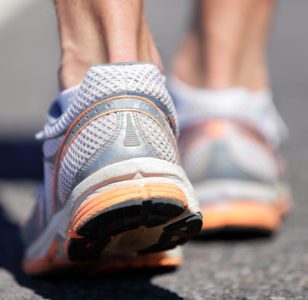 Your Achilles tendon is the strongest and largest tendon in the body, but even it can rupture if it is overstressed or due to microtearing over decades of movement. Achilles tendon injuries have increased over the last 30 years, and researchers have become more interested in what life is like after an Achilles tendon rupture.

Since a lot of ruptures occur while running or during athletic activity, researchers were curious to see if patients changed running style after they had recovered from a torn Achilles. Below, you can take a closer look at a study that examined that theory.
Running After A Torn Achilles

But the focus of this study was to see if athletes had different running mechanics after they had recovered from an Achilles tear. For their study, researchers looked at the hip, knee and ankle joint mechanics of 22 patients between the age of 22 and 50. Half of the group had recovered from a torn Achilles, while the other half were a healthy control group, who were matched based on age, sex, BMI, exercise pattern and footstrike patterns. Researchers had participants run on a treadmill and studied their running mechanics.

After looking at the data, researchers found that athletes who had previously suffered an Achilles tendon rupture had a noticeable decrease in their ankle range of motion, a greater range of motion in the knee on the same leg as the previously torn Achilles, and an overextended knee during initial contact with the ground with their affected limb. Runners with a previous Achilles injury also:

Had longer Achilles tendon lengths
Had a decrease in calf muscle strength
Had a 22 percent increase in their hip joint movement on the opposite side of their body to the affected limb compared to the control group.

The final bullet point led researchers to believe that runners with a previous Achilles tendon injury may have increased weight bearing on the opposite side of the body, which suggests that their running style has been slightly modified to compensate for the previously torn Achilles. This compensation may help to decrease the likelihood of re-injury to the same Achilles, but it could increase your likelihood of injuring your other Achilles.

Researchers recommended against participating in high-performance activities where someone would be at a high-risk of injuring their knee or Achilles if athletes want to avoid a subsequent injury after an initial Achilles tear. That’s easier said than done, however, especially if you’re a high school athlete or just someone who loves playing sports. If you plan on returning to activity, have your Achilles surgery performed by a skilled orthopedic surgeon, follow your rehab care guidelines as prescribed, and don’t return to activity until granted clearance by your doctor.