Unstable Ankle Fractures In The Elderly – A Case For Casting 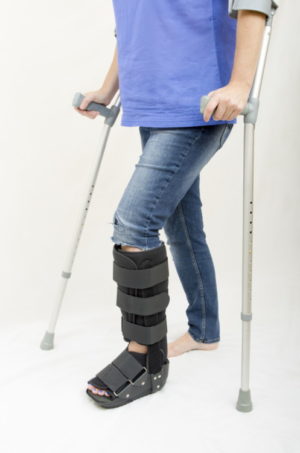 New research published in the Journal of the American Medical Association suggests that for some elderly patients with unstable ankle fractures, a below-the-knee cast with minimal padding may produce similar outcomes as surgical fixation.

“Close contact casting was delivered successfully for most participants, substantially reducing the number of patients requiring invasive surgical procedures at the outset and additional operations during a 6-month period,” the authors wrote.

However, the findings can’t be used across all elderly populations and ankle fractures. Here’s a closer look at the findings.
Ankle Fracture Study

For their study, researchers analyzed the outcomes of patients undergoing either casting or surgery for an unstable ankle fracture. All patients were over the age of 60, with an average age of 71, and they had one or more acute malleolar fractures with an unstable ankle joint diagnosed with an X-ray. Patients also needed to be ambulatory before the ankle surgery, able-bodied enough to consent to treatment and follow up instructions, and live close enough to a participating center in order to return for follow up visits.

275 patients received a below-knee cast with minimal padding shortly after suffering their injury, while 291 patients underwent a surgical operation which consisted of an internal fixation with implants and postoperative splints. Here’s a look at what the researchers uncovered:

At six months there was no difference in the mean diagnostic/functional score between the two groups.

Means scores on the mental and physical portions of the health survey were similar between the two groups.

Infection and wound breakdown occurred in 10 percent of patients undergoing surgery, but only in one percent of people getting the cast.

Casting “resulted in a meaningful mean reduction in overall operating room time and implant use and small increases in casts, orthopaedic outpatient or office consultations, and hospital transport use. There was no difference in length of hospital stay or time to weight bearing,” researchers wrote.

So while the findings may suggest that casting is the best option, researchers pointed to one final finding that may put that notion to a halt.

“For participants in the casting arm who received treatment according to allocation, later loss of fracture reduction resulted in conversion to internal fixation for 52 of 275 (19%) or remanipulation and casting applied in the operating room for 10 of 275 (4%),” the authors wrote.

What this means is that nearly 20 percent of people in the casting group eventually needed to undergo surgery because their ankle joint wasn’t healing properly, and another four percent needed to have their leg recasted to help unionize the fracture site. Moreover, researchers noted that at six months post op, only four percent of adults in the surgery group expressed fracture malunion when confirmed with an x-ray, while 15 percent of people in the casting group expressed malunion.

So when you look at the big picture, 19 percent of people in the casting group needed to undergo surgery because their ankle wasn’t healing as hoped with the cast, four percent needed to be recasted, and 15 percent expressed fracture malunion at the end of the study, meaning that 38 percent of people in the casting group did not achieve the ideal outcome. So while casting can cut down on operating costs and help elderly individuals avoid going under the knife, it may not be as promising a technique compared to surgery as originally thought.
Share this: