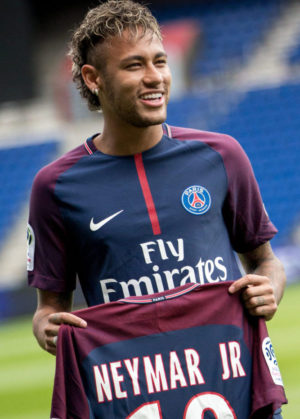 Brazilian soccer star Neymar suffered what is believed to be a serious ankle injury while playing for Paris Saint-Germain on Sunday. PSG lost the game 1-0 against Lyon, but losing Neymar may be the bigger loss, especially considering that the French club drew Barcelona FC during Monday’s Champion’s League draw.

Neymar suffered the injury in stoppage time as he tried to advance the ball in hopes of scoring the tying goal. After cutting right, a defender dove forward in an attempt to knock the ball away. Neymar’s left leg and ankle got caught between the defender’s legs, and Neymar crumpled to the ground as his ankle twisted awkwardly.

And while it can sometimes be difficult to tell whether or not a soccer player is actually injured when they are tackled because they oftentimes exaggerate the extent of their injuries, it was immediately clear that Neymar was in significant pain. He was in tears as he was being attended to by medical staff, and he was eventually stretchered off the pitch. He was originally scheduled to undergo an MRI on Sunday night, but the team decided to hold off until Monday morning. Just hours ago the team confirmed that Neymar underwent scans on Monday, and although more tests will be coming in the next 48 hours, the team announced in a press release that the first scans were “encouraging.”